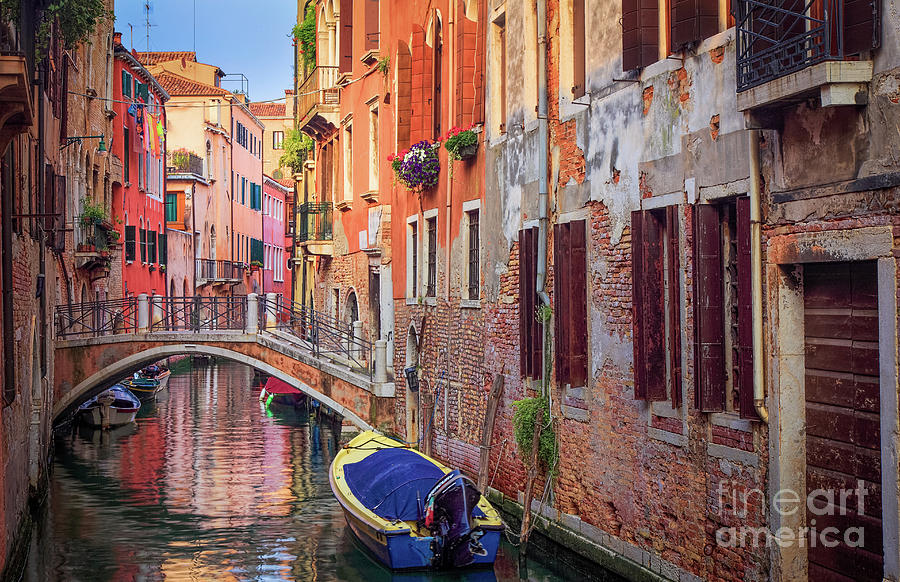 One of many foot bridges in Venice, reflecting in a small canal
.....
Venice is a city in northeastern Italy sited on a group of 118 small islands separated by canals and linked by bridges. It is located in the marshy Venetian Lagoon which stretches along the shoreline, between the mouths of the Po and the Piave Rivers. Venice is renowned for the beauty of its setting, its architecture and its artworks. The city in its entirety is listed as a World Heritage Site, along with its lagoon. Venice is the capital of the Veneto region. In 2009, there were 270,098 people residing in Venice's comune. Although there are no historical records that deal directly with the founding of Venice, tradition and the available evidence have led several historians to agree that the original population of Venice consisted of refugees from Roman cities near Venice such as Padua, Aquileia, Treviso, Altino and Concordia (modern Portogruaro) and from the undefended countryside, who were fleeing successive waves of Germanic and Hun invasions. Some late Roman sources reveal the existence of fishermen on the islands in the original marshy lagoons. They were referred to as incolae lacunae ("lagoon dwellers"). The traditional founding is identified with the dedication of the first church, that of San Giacomo at the islet of Rialto (Rivoalto, "High Shore"), which is said to have been at the stroke of noon on 25 March 421.

Hello Inge, Sharing my Congratulations on your recent Feature in Wisconsin Flower and Scenery !

It is with great pride and pleasure that I am FEATURING your artwork this week on our Wisconsin Flowers and Scenery Homepage. Your work shows expertise in the presentation of this fine art piece. Thanks much for sharing your works with us and being a member of our family of friends and fine artists in our WFS group. Liked & Faved Randy B. Rosenberger Administrator of the Wisconsin Flowers and Scenery group

What a beautiful city and capture. Venice is a city like no other. Love your capture Inge. Great detail, lighting and reflection. I feel as if I am riding down the canal in a gondola. Beautifully and perfectly composed. L/Fave/Tweeted.

Was happy to Feature this one in "A Broad Landscape View" Years ago it had 700 members, today there are over 3000. Was very pleased to find the quality today, some of the best over the years...

Inge, Congratulations on your feature in 1 Weekly - ALL Stars l/f

Beautiful image Inge, Congratulations on your Feature in 1 Weekly ALL Stars!...L/F

Inge, as always your composition and colors are fantastic. Congratulations on your Feature in 1 Weekly - ALL Stars. F/L

Congrats on your sale :)!

Congratulations on your sale! L/F