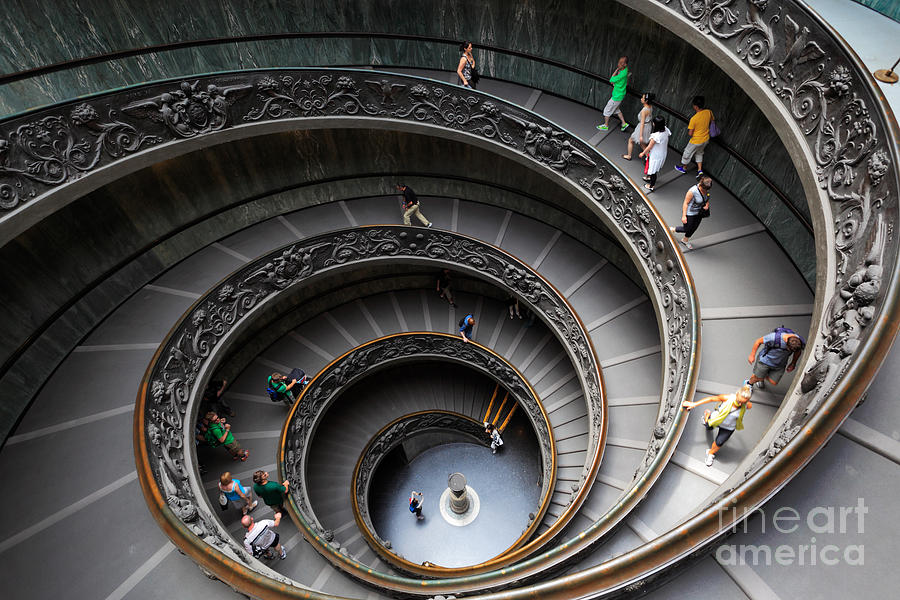 Spiral staircase in the Vatican museums (Italian: Musei Vaticani)
.....
Captured with Canon 5D Mk II and a Canon EF 17-40/4L lens
.....
Spiral stairs of the Vatican Museums, designed by Giuseppe Momo in 1932.
The Vatican Museums (Italian: Musei Vaticani), in Viale Vaticano in Rome, inside the Vatican City, are among the greatest museums in the world, since they display works from the immense collection built up by the Roman Catholic Church throughout the centuries including some of the most renowned classical sculptures and most important masterpieces of Renaissance art in the world.
Pope Julius II founded the museums in the early 16th century. The Sistine Chapel with its ceiling decorated by Michelangelo and the Stanze della Segnatura decorated by Raphael are on the visitor route through the Vatican Museums. They were visited by 4,310,083 people in the year 2007. The Vatican Museums broke attendance records in 2011 with just over 5 million people.
The Vatican Museums trace their origin to one marble sculpture, purchased 500 years ago: The sculpture of Laoco�n and his Sons was discovered 14 January 1506, in a vineyard near the basilica of Santa Maria Maggiore in Rome. Pope Julius II sent Giuliano da Sangallo and Michelangelo Buonarroti, who were working at the Vatican, to examine the discovery. On their recommendation, the pope immediately purchased the sculpture from the vineyard owner. The pope put the sculpture of Laoco�n and his sons on public display at the Vatican exactly one month after its discovery.
The Museum Christianum was founded by Benedict XIV, and some of the Vatican collections formed the Lateran Museum, which Pius IX founded by decree in 1854.
The Museums celebrated their 500th anniversary in October 2006 by permanently opening the excavations of a Vatican Hill necropolis to the public.

Congratulations on this Christmas Day Sale!!

Love it, congratulations on selling.

CONGRATULATIONS your outstanding artwork has been chosen for FEATURE in one of the most highly viewed Art Groups on FAA: MOTIVATION MEDITATION INSPIRATION! From the hundreds of pieces of artwork received daily to review and choose from, your work has been chosen because of it's excellence!

This is fantastic Inge! V/F

Crazy image Inge! Really like the off center placement of the spiral. Cool! (f/v)

Thanks for the thoughtful comment, Jon. I really appreciate it :-)

Love this Unique Piece, published in - Artist News - an Internet Weekly... http://paper.li/f-1343723559# and on the Home page of ARTIST NEWS. Thank You for submitting it, today.

Thanks so very much, Nadine and Bob!

Thanks so very much, Karen!

Thank you so very much, Alfonso!

Thanks once more, Isaac!

Congrats on your sale Inge!!

I couldn't make it to so wide angle with lenses but my eyes fortunately did it ;))

Yes, Slavi, seeing it in person adds a whole other dimension to it. It is a beautiful staircase. I was working around the top of the stairs with my 17-40 until I found a good composition and people where I wanted them ;-)

Thanks so much, BIll!

Congrats Inge. It is a fantastic image, one I could never get bored with.

Thanks for the generous words, Shelle :-)