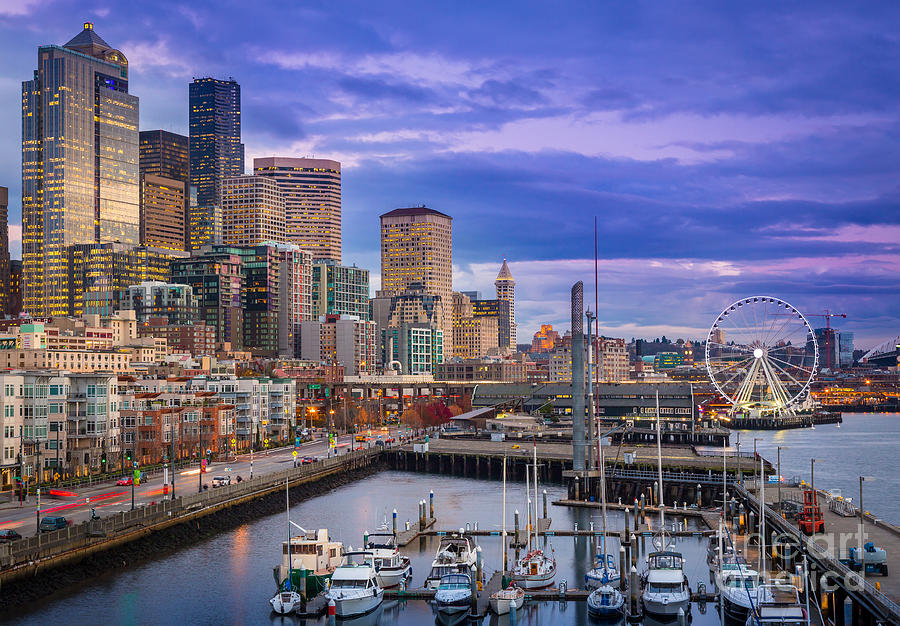 Seattle skyline with the "Great Wheel"
.....
Seattle is a major coastal seaport and the seat of King County, in the U.S. state of Washington. With 620,778 residents as estimated in 2011, Seattle is the largest city in the Pacific Northwest region of North America and the largest city on the West Coast north of San Francisco. The Seattle metropolitan area of around 4 million inhabitants is the 15th largest metropolitan area in the United States. The city is situated on a narrow isthmus between Puget Sound (an arm of the Pacific Ocean) and Lake Washington, about 100 miles (160 km) south of the Canada-United States border, but further north than Toronto.
The Seattle area had been inhabited by Native Americans for at least 4,000 years before the first permanent white settlers. Arthur A. Denny and his group of travelers, subsequently known as the Denny Party, arrived at Alki Point on November 13, 1851. The settlement was moved to its current site and named "Seattle" in 1853, after Chief Si'ahl of the local Duwamish and Suquamish tribes.
Logging was Seattle's first major industry, but by the late 19th century the city had become a commercial and shipbuilding center as a gateway to Alaska during the Klondike Gold Rush. By 1910, Seattle was one of the 25 largest cities in the country. However, the Great Depression severely damaged the city's economy. Growth returned during and after World War II, due partially to the local Boeing company, which established Seattle as a center for aircraft manufacturing. The city developed as a technology center in the 1980s. The stream of new software, biotechnology, and internet companies led to an economic revival, which increased the city's population by almost 50,000 between 1990 and 2000. More recently, Seattle has become a hub for "green" industry and a model for sustainable development.
Seattle has a noteworthy musical history. From 1918 to 1951, there were nearly two dozen jazz nightclubs along Jackson Street in the current Chinatown/International District. The jazz scene developed the early careers of Ray Charles, Quincy Jones, Ernestine Anderson and others. Seattle is also the birthplace of rock legend Jimi Hendrix and the rock music style known as "grunge", which was made famous by local groups Melvins, Nirvana, Soundgarden, Alice in Chains, and Pearl Jam. In more recent years, Seattle has been known for indie rock and indie dance music.

Congratulations on your sale.

It is with great pleasure I chose this piece of artwork from your portfolio to FEATURE on our homepage of the Wisconsin Flowers and Scenery group. This is the quality of fine art that makes it a joy to share with other artists and prospective customers. Love the beauty and composition of this skillfully presented piece of beauty. Thanks for sharing! Liked and faved Forever, Elvis Randy B. Rosenberger

Nice! Congratulations on your sale. ~ CLE

Inge this is an awesome composition....love it! v/f

Great shot, I just spent the night at the marina there for my birthday.. what an great place to tie up.