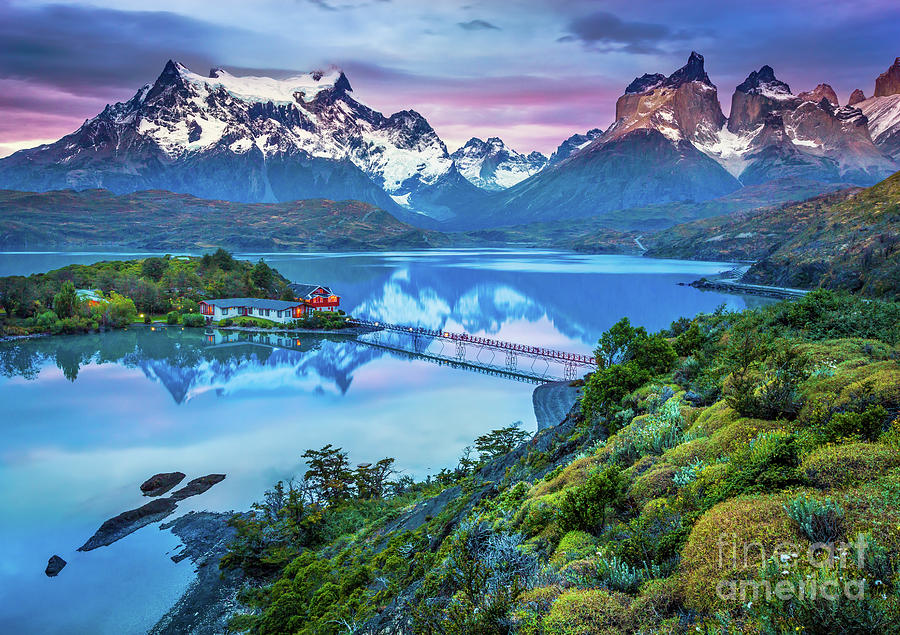 Lago Pehoe and the Los Cuernos peaks in Torres del Paine in the month of March
.....
Torres del Paine National Park is a national park encompassing mountains, glaciers, lakes, and rivers in southern Chilean Patagonia. The Cordillera del Paine is the centerpiece of the park. It lies in a transition area between the Magellanic subpolar forests and the Patagonian Steppes. The park is located 112 km (70 mi) north of Puerto Natales and 312 km (194 mi) north of Punta Arenas. The park borders Bernardo O'Higgins National Park to the west and the Los Glaciares National Park to the north in Argentine territory.
Torres del Paine National Park is part of the Sistema Nacional de �reas Silvestres Protegidas del Estado de Chile (National System of Protected Forested Areas of Chile). In 2006, it measured approximately 242,242 hectares. It is one of the largest and most visited parks in Chile. The park averages around 150,000 visitors a year, of which 60% are foreign tourists, who come from all over the world.
The park is one of the 11 protected areas of the Magallanes Region and Chilean Antarctica (together with four national parks, three national reserves, and three national monuments). Together, the protected forested areas comprise about 51% of the land of the region.
The Torres del Paine are the peaks of the mountain range, Cerro Paine. They extend 3,050 meters above sea level, and are joined by the Cuernos del Paine. The area also boasts valleys, rivers such as the Paine, lakes, and glaciers. The well-known lakes include Grey, Pehoe, Nordenskiold, and Sarmiento. The glaciers, including Grey, Pingo, Tyndall, and Geikie, belong to the Southern Patagonia Ice Field.

Congratulations! Your beautiful HDR image has been featured on the homepage of the original "HDR photography" group here at Fine Art America.

Congratulations Inge, your Fine Art Photograph is a FEATURED IMAGE this week on the Home Page of the FAA Group "The Magic Hour Of Blue And Gold Photography". To ensure that your feature is archived properly, I invite you to post your photograph in the group's “Featured Photographs And Thank You Thread #6 February/2021”, located in the Discussions link. You are invited to post your own personal “Thank You For the Feature” separately as a new entry in the Discussion thread as well.

One of your peers nominated this image in the 1000 views Groups nominated images by your fellow artist in the Special Features #16 promotion discussion. Please visit and pass on the love to another artist.....L/F/Tw

A beautiful image, Inge with wonderful light and reflections. F/L

Congratulations on being featured in the FAA Group 'Promote Your Work Here and Get Noticed.' To ensure your feature remains available over time, post your featured image(s) in the Group's featured image archive (l/f and pinned, www.pinterest.ca/tendrelimages/01-promote-your-work-here-get-noticed/)

Congratulation.....your wonderful work has been featured in the 1000 Views on 1 Image Group l/f/p

Great! Congrats on your sale! fav

Congratulations on the sale

This is amazing, congrats!

Congratulations on your feature in The Artistic Photographer on Fine Art America!

This is the very essence of pristine, Inge! Glad to have seen this in the 'Hotel Lobby Art' group! Liked!

Please consider adding this to the "Mountains Canyons and Rock Formations" group: http://fineartamerica.com/groups/mountains-canyons-and-rock-formations.html

Great capture of a beautiful location,,LF

Thanks Christopher. I did actually live there for a few days...it's a hotel :-)

I think I want to live there. V

CONGRATULATIONS your outstanding artwork is FEATURED in the highly viewed Art Group: MOTIVATION MEDITATION INSPIRATION! From the hundreds of pieces of artwork received daily to review and choose from, your work has been chosen because of it's excellence!