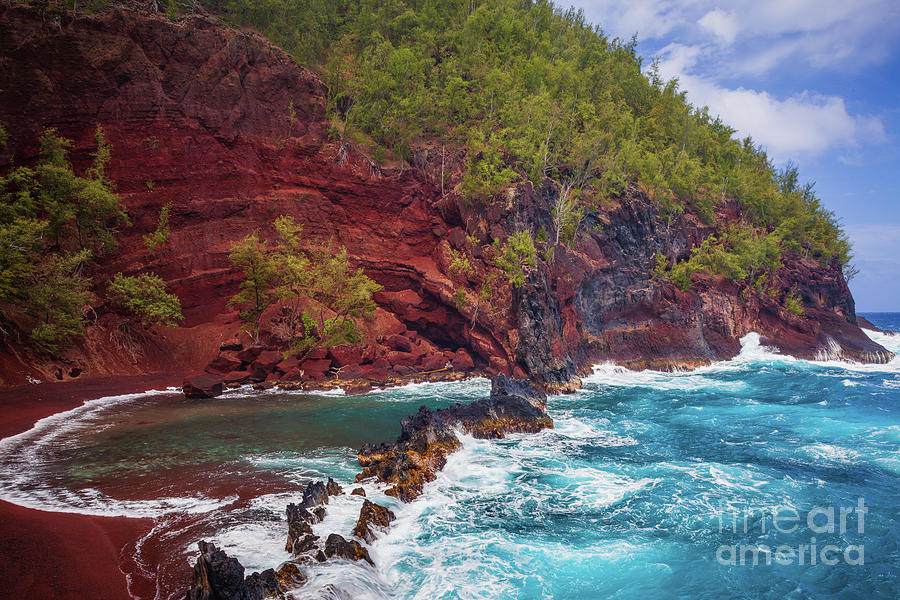 Red sand beach in Hana, Maui, Hawaii
.....
The island of Maui is the second-largest of the Hawaiian Islands at 727.2 square miles and is the 17th largest island in the United States. Maui is part of the State of Hawaiʻi and is the largest of Maui County's four islands, bigger than Molokaʻi, Lānaʻi, and unpopulated Kahoʻolawe. In 2010, Maui had a population of 144,444, third-highest of the Hawaiian Islands, behind that of Oʻahu and Hawaiʻi Island. Kahului is the largest census-designated place (CDP) on the island with a population of 26,337 as of 2010 and is the commercial and financial hub of the island. Wailuku is the seat of Maui County and is the third-largest CDP as of 2010. Other significant places include Kīhei (including Wailea and Makena in the Kihei Town CDP, which is the second-most-populated CDP in Maui); Lahaina (including Kāʻanapali and Kapalua in the Lahaina Town CDP); Makawao; Pāʻia; Kula; Haʻikū; and Hāna. Native Hawaiian tradition gives the origin of the island's name in the legend of Hawaiʻiloa, the Polynesian navigator credited with discovery of the Hawaiian Islands. According to that legend, Hawaiʻiloa named the island of Maui after his son, who in turn was named for the demigod Māui. The earlier name of Maui was ʻIhikapalaumaewa. The Island of Maui is also called the "Valley Isle" for the large isthmus between its northwestern and southeastern volcanoes and the numerous large valleys carved into both mountains.

😊 💖 🌸Congratulations on your recent sale of a wonderful work. 😊 💖 🌸

A Beautiful Blessing.......Congrats on Your Sale!!

Congratulations on your sale of this wonderful artwork! F/L

"Art is the stored honey of the human soul, gathered on wings of misery and travail." -- Congratulations on your recent sale of this amazing Work!

Wow, this is gorgeous! Love the blue of the water and the red of the sand and cliff! Excellent!

What a fine piece of artwork for me to proudly display on our Featured Artwork section of our Homepage, within our family of friends and fine artists, in our Wisconsin Flowers and Scenery group. It is truly an honor to showcase your talents and beautiful artworks within our site. LIKED Forever Elvis

this is a stunning image Inge love the colours too voted

Inge, what a great photo, love the colors! v/f

Thanks Elaine. This red sand beach on the far northeastern tip of Maui was such a a great place to visit :-)