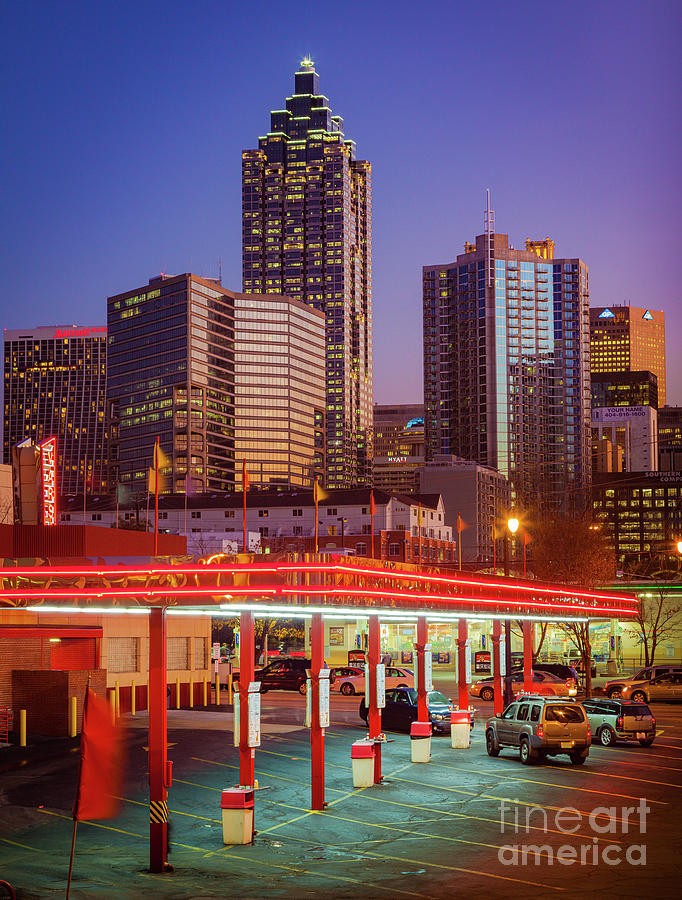 Neon at a drive-in diner in midtown Atlanta
.....
Captured with a Canon 5D MkII and a Canon EF 24-105/4L IS lens
.....
Atlanta officially The City of Atlanta, is the capital of and the most populous city in the U.S. state of Georgia, with an estimated 2011 population of 432,427. Atlanta is the cultural and economic center of the Atlanta metropolitan area, home to 5,359,205 people and the ninth largest metropolitan area in the country. Atlanta is the county seat of Fulton County, and a small portion of the city extends eastward into DeKalb County.
Atlanta was established in 1837 at the intersection of two railroad lines, and the city rose from the ashes of the Civil War to become a national center of commerce. In the decades following the Civil Rights Movement, during which the city earned a reputation as "too busy to hate" for the progressive views of its citizens and leaders, Atlanta attained international prominence. Atlanta is the primary transportation hub of the Southeastern United States, via highway, railroad, and air, with Hartsfield�Jackson Atlanta International Airport being the world's busiest airport since 1998. Atlanta is considered an "alpha(-) world city," and, with a gross domestic product of US$270 billion, Atlanta�s economy ranks 15th among world cities and sixth in the nation. Although Atlanta�s economy is considered diverse, dominant sectors include logistics, professional and business services, media operations, government administration, and higher education. Geographically, Atlanta is marked by rolling hills and dense tree coverage. Revitalization of Atlanta's neighborhoods, initially spurred by the 1996 Olympics, has intensified in the 21st century, altering the city's demographics, politics, and culture.

Congratulations!! This beautiful image has been selected to be featured for the week in the “Art for Ever with You” Group Home Page. You are welcome to add a preview of this featured image to the group’s discussion post titled “2018 July: Stunning Group Featured Images and Thank-you’s” for a permanent display within the group, to share this achievement with others. If the activity is allowed, your image will also be posted to our group Google+ page. Thank you for your participation in the group! ~Jan (July 16, 2018)

Inge, Congratulations, your exceptional photographic artwork has been featured in our group, Artistic Photography! You are invited to archive it in the Featured Work Part II discussion thread for more visibility.

Congratulations! Your extraordinary work has been Featured in the Fine Art America group “The Earth Is Art”! You are invited to archive your featured image for permanent storage and for viewing on the Discussions Page in: “2018 Member's Extraordinary Features Images Archive 3.0!” theme. Simply copy your image’s Embed URL on your image’s profile page, and paste it into the Discussion Topic site: https://fineartamerica.com/groups/the-earth-is-art-.html?showmessage=true&messageid=4138611

Congratulations for having this great piece of artwork chosen to be featured in our Wisconsin Flowers and Scenery group. I am proud to be able to support and promote all artists within our group. I very much enjoyed viewing the masterfully done piece from you portfolio to show off to all other artists and to attract perspective buyers. Thanks for sharing your beautiful artwork with all FAA members. Well worthy of this recognition.

This is a good one Inge! Did you finally get into HDR? Congratulations on your features! (v)

Thanks Jon. No this is not HDR, it's just one single exposure (RAW) at the right time of day, evening just after sunset.

Thanks Vivian, I am honored :-)

Congrats on your sale, Inge.

Thanks so very much, Guido :-)

Thank you very much, Anthony!

Thank you, Andee, good to to see another sale; as always :-)

Thanks, Robert. Night photograph is fun! Looking forward to the new 5D Mk III to get even cleaner long exposures at night :-)

Thanks Dave! Spent half a day here, waiting for the light :-)