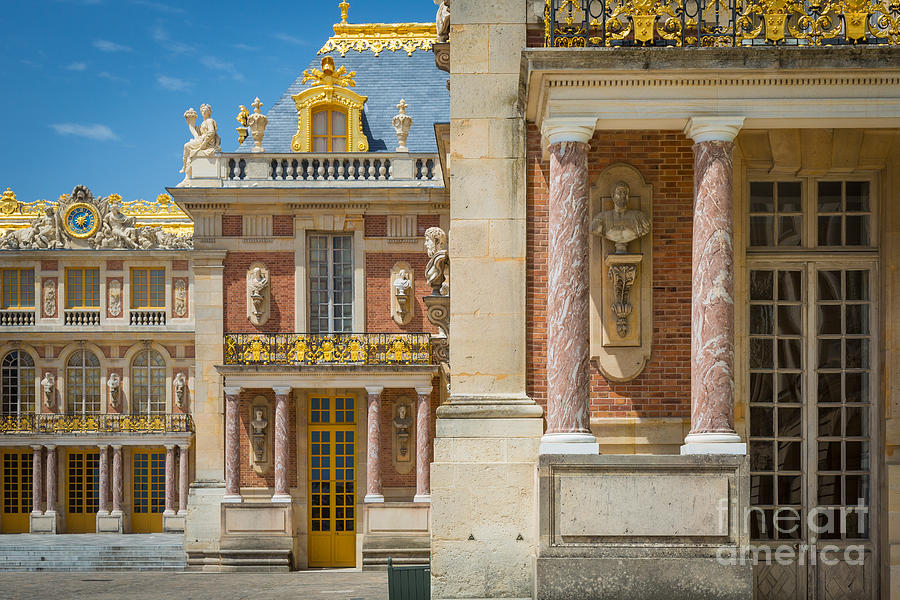 The Palace of Versailles, or simply Versailles, is a royal chateau in Versailles in the Ile-de-France region of France. In French it is the Chateau de Versailles.
When the chateau was built, Versailles was a country village; today, however, it is a suburb of Paris, some 20 kilometres southwest of the French capital. The court of Versailles was the centre of political power in France from 1682, when Louis XIV moved from Paris, until the royal family was forced to return to the capital in October 1789 after the beginning of the French Revolution. Versailles is therefore famous not only as a building, but as a symbol of the system of absolute monarchy of the Ancien Regime.
The Palace of Versailles, also known as The Chateau de Versailles, has been the scene for several historic events, not the least of which was the signing, on 28 June 1919 within the Hall of Mirrors, of the Peace Treaty between defeated Germany and the Allies that brought the First World War officially to an end. The signing of the treaty at Versailles, of course, mirrored the proclamation, in 1871 within the same long hall, of the establishment of the German Empire under the Prussian king, subsequently the Kaiser. Originally, the palace started out as simply a hunting lodge built by Louis XIII. However, after that Louis XIV decided he wanted to build the palace that we know today at that exact location. In 1789 the palace lost its seat in power, but today hosts the Museum of France's history.

What a great perspective, Inge! Congrats on the sale.

Congratulations on the sale!

Congratulations on your sale! I love your work!

Thank You for Submitting your Artwork.... Liked the subject, description, technique, composition, and color... So Today it was Published in the Internet publication ARTISTS NEWS.... YOU or Friends Can use Ctl-C to copy the link: http://paper.li/f-1343723559 and Ctl-V to put it into your the Browser Address bar, to view the publication. Then, Tweet, FB, and email, etc a copy of the publication, to just anyone you feel would be interested. Happy Promoting! :-)

Thanks, Elise. Hard to photograph this subject in the middle of the day, but I liked this angle too.