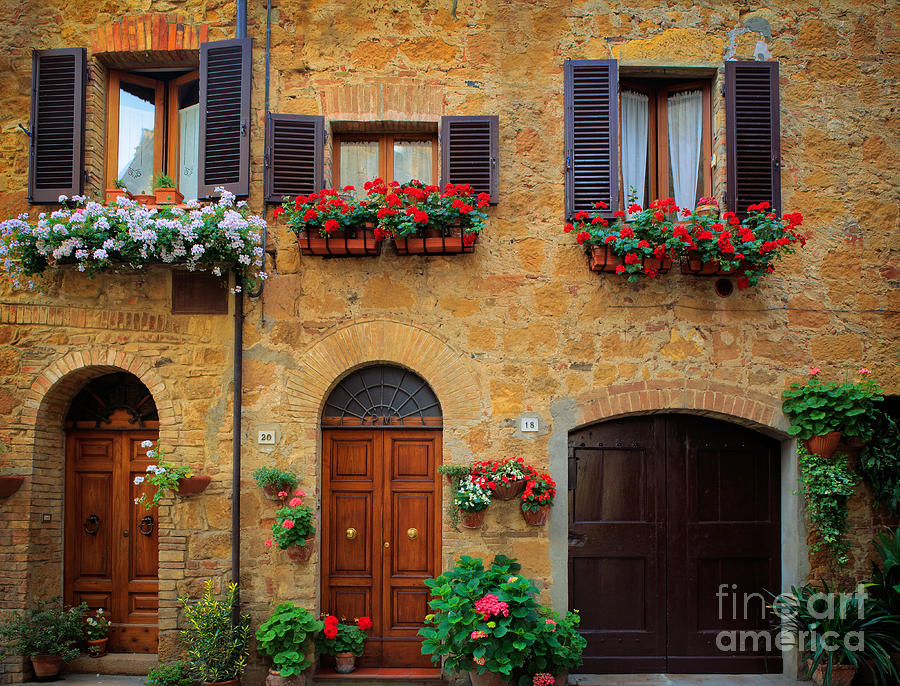 House fronts in the Tuscan hill town of Pienza
.....
Pienza, a town and comune in the province of Siena, in the Val d'Orcia in Tuscany (central Italy), between the towns of Montepulciano and Montalcino, is the "touchstone of Renaissance urbanism."
In 1996, UNESCO declared the town a World Heritage Site, and in 2004 the entire valley, the Val d'Orcia, was included on the list of UNESCO's World Cultural Landscapes.
Pienza was rebuilt from a village called Corsignano, which was the birthplace (1405) of Aeneas Silvius Piccolomini (Italian: Enea Silvio Piccolomini), a Renaissance humanist born into an exiled Sienese family, who later became Pope Pius II. Once he became Pope, Piccolomini had the entire village rebuilt as an ideal Renaissance town. Intended as a retreat from Rome, it represents the first application of humanist urban planning concepts, creating an impetus for planning that was adopted in other Italian towns and cities and eventually spread to other European centers.
The rebuilding was done by Florentine architect Bernardo Gambarelli (known as Bernardo Rossellino) who may have worked with the humanist and architect Leon Battista Alberti, though there are no documents to prove it for sure. Alberti was in the employ of the Papal Curia at the time and served as an advisor to Pius. Construction started about 1459. Pope Pius II consecrated the Duomo on August 29, 1462, during his long summer visit. He included a detailed description of the structures in his Commentaries, written during the last two years of his life.

That's lovely! How is Schaumburg, I used to live there in the 70's?

CONGRATS ON YOUR SALE INGE

Congrats on your sale ..well done!

Beautifully done. Makes me want to go back there. Congrats on your sale!

Congrats on your sale, Inge! :)

Beautiful! Congrats on your sale!

Inge I Congrats you on your sale what a wonderful Tuscan Home !!v

Congratulations on your sale Inge!...v

Yes, this is Tuscany !!! Beautiful capture !