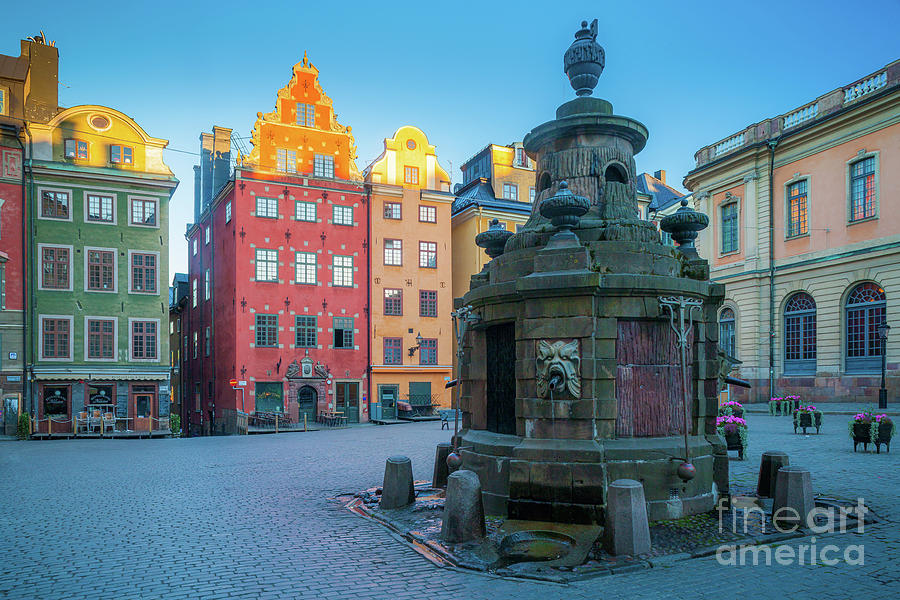 House fronts at Stortorget square in Stockholm's Old Town, Sweden
.....
Gamla stan (The Old Town), until 1980 officially Staden mellan broarna (The Town between the Bridges), is the old town of Stockholm, Sweden. Gamla stan consists primarily of the island Stadsholmen. The surrounding islets Riddarholmen, Helgeandsholmen, and Stromsborg are officially part of, but not colloquially included in, Gamla stan. The word "stan" is simply a contraction of the word "staden" ("sta'n"), meaning "the town."The town dates back to the 13th century, and consists of medieval alleyways, cobbled streets, and archaic architecture. North German architecture has had a strong influence in the Old Town's construction. Stortorget is the name of the scenic large square in the centre of Gamla Stan, which is surrounded by old merchants' houses including the Stockholm Stock Exchange Building. The square was the site of the Stockholm Bloodbath, where Swedish noblemen were massacred by the Danish King Christian II in November, 1520. The following revolt and civil war led to the dissolution of the Kalmar Union and the subsequent election of King Gustav I. The name Stockholm originally referred to Gamla Stan only, but as the city expanded, the name now also refers several suburban areas and the metro region. The name Stockholm means "log island" in Swedish.

Congratulations, your wonderful work is featured on the home page of the quadruple-curated group, All Stars. Featured images are changed weekly, so for your image to remain visible for potential buyers who visit the group later, please post your featured images in the featured discussion thread for 2021.

wow this is so wonderfully beautiful, Congratulations.

One of the best cities in the world! Great shot Inge!

Congratulations on your sale, Inge...beautiful!

Congrats on your sale, Inge!

Sandi, thanks so much!

Congratulations on a great sale, Inge!!

Thank you, Janina. I wish that you get better soon.