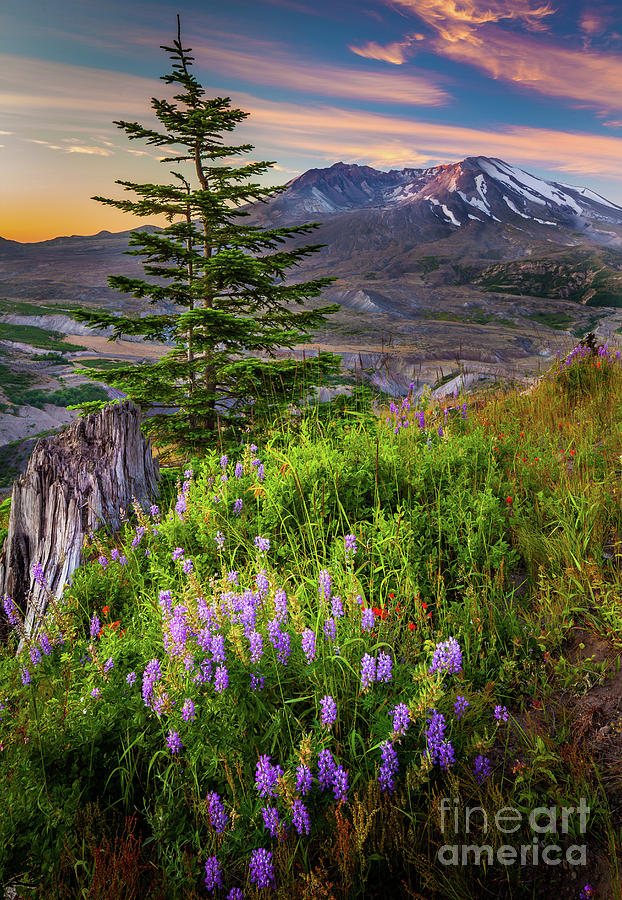 Mount St. Helens National Volcanic Monument is a U.S. National Monument that includes the area around Mount St. Helens in Washington. It was established on August 27, 1982 by U.S. President Ronald Reagan following the 1980 eruption of Mount St. Helens. The 110,000 acre National Volcanic Monument was set-aside for research, recreation, and education. Inside the Monument, the environment is left to respond naturally to the disturbance.
.....
Mount St. Helens is an active stratovolcano located in Skamania County, Washington, in the Pacific Northwest region of the United States. It is 96 miles south of Seattle, Washington and 50 miles (80 km) northeast of Portland, Oregon. Mount St. Helens takes its English name from the British diplomat Lord St Helens, a friend of explorer George Vancouver who made a survey of the area in the late 18th century. The volcano is located in the Cascade Range and is part of the Cascade Volcanic Arc, a segment of the Pacific Ring of Fire that includes over 160 active volcanoes. This volcano is well known for its ash explosions and pyroclastic flows.
Mount St. Helens is most notorious for its catastrophic eruption on May 18, 1980, at 8:32 am PDT, the deadliest and most economically destructive volcanic event in the history of the United States. Fifty-seven people were killed; 250 homes, 47 bridges, 15 miles of railways, and 185 miles of highway were destroyed. A massive debris avalanche triggered by an earthquake measuring 5.1 on the Richter scale, caused an eruption, reducing the elevation of the mountain's summit from 9,677 ft to 8,365 ft and replacing it with a 1 mile wide horseshoe-shaped crater. The debris avalanche was up to 0.7 cubic miles in volume. The Mount St. Helens National Volcanic Monument was created to preserve the volcano and allow for its aftermath to be scientifically studied.
As with most other volcanoes in the Cascade Range, Mount St. Helens is a large eruptive cone consisting of lava rock interlayered with ash, pumice, and other deposits. The mountain includes layers of basalt and andesite through which several domes of dacite lava have erupted. The largest of the dacite domes formed the previous summit, and off its northern flank sat the smaller Goat Rocks dome. Both were destroyed in the 1980 eruption.

Lovely image from every aspect.Congratulations on your sale.

Congratulations, Inge, on your sale!

Great photo. Congrats on your sale!

Pure magic, that is! Beautiful. F/L

Another masterpiece Inge! Love the POV you used. V/F (as always! :) )

Thank you so much, Rosanne!

Thanks for taking the time and for the kind words. Thanks also for the vote!

Thanks so very much for the comment and vote, Bonita! F/V

Inge, this is a stunning capture of Mount St. Helens' Crater.....Love he depth of this and the flowers in the foreground 8)

Thank you very much for the nice feedback, Ellen :-)

Beautiful! I worked building the road that now runs up to Johnston Ridge Observatory. It truely is amazing how much re-growth the area has seen.

Thanks Beve. Wow, that must have been some project to build that road! It's a nice road. I was here all alone that morning; so peaceful, except for a howling coyote.