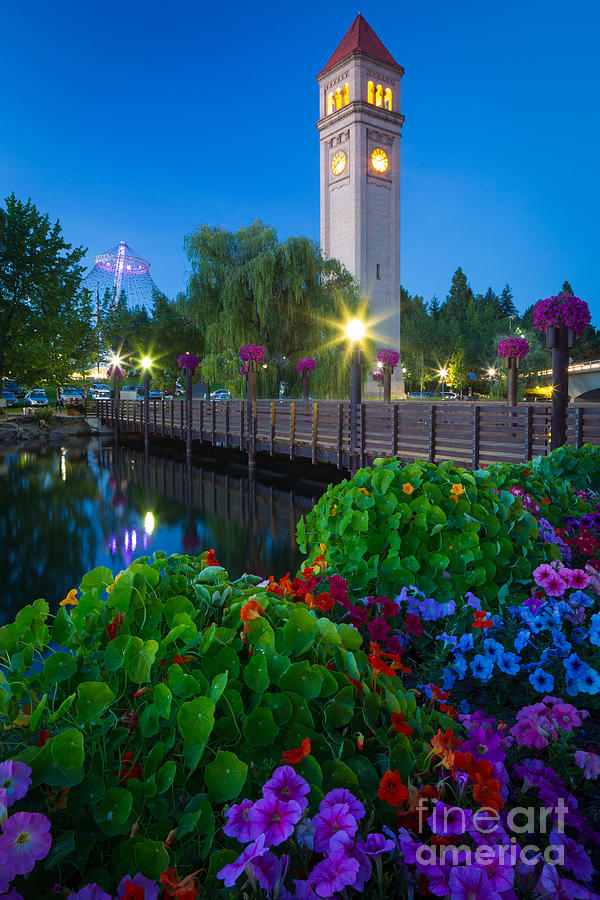 The Spokane clock tower was once part of a Great Northern Railway depot that once occupied the site. Spokane is a city located in the Northwestern United States in the state of Washington. It is the largest city of Spokane County of which it is also the county seat, and the metropolitan center of the Inland Northwest region. The city is located on the Spokane River in Eastern Washington, 92 miles south of the Canadian border, approximately 20 miles from the Washington�Idaho border, and 232 miles east of Seattle. The Spokane area is considered to be one of the most productive mining districts in North America. Spokane's economy has traditionally been based on natural resources, being a center for mining, timber, and agriculture; however, the city's economy has diversified to include other industries, including the high-tech and biotech sectors. Spokane is known as the birthplace of Father's Day, hosted the first environmentally themed World's Fair, Expo '74, and is home to Gonzaga University and Whitworth University.
The city of Spokane (then known as "Spokan Falls") was settled in 1871 and officially incorporated as a city in 1881. The city's name is drawn from the Native American tribe known as the Spokane, which means "Children of the Sun" in Salishan. Spokane's official nickname is the "Lilac City", named after the flowers that have flourished since their introduction to the area in the early 20th century. Completion of the Northern Pacific Railway in 1881 brought major settlement to the Spokane area.

Congrats on your sale! Beautiful!

Keep up the good work!

Congrats on your Sale! Well done!

Yet another stunningly beautiful piece of artwork, congrats on your sale. :)

Anyone that hasn't been there would presume you doctored this up from other images. But you didn't. It really is that beautiful there. Great shot, colors and way voted.

Thanks Christine. This is from Lightroom, so not much doctoring here. I stayed in this location for several hours, and this was the best moment: the blue hour. Better outcome than I had hoped for.

Thank, Lynn. I was pretty happy when finally everything came together here.

Thanks so much, Betty!

Many thanks as always, Robert!

Thanks, good to hear that from a Spokane native. Lovely city. My son studies at Gonzaga :)

Congratulations! "Spokane Clocktower by Night" is Featured today in "Timeless Collections"! Thanks so much! Enjoy! Shawn Hughes

Hi Shawn, and thanks. For some reason I cannot see it among the featured images on the group homepage?