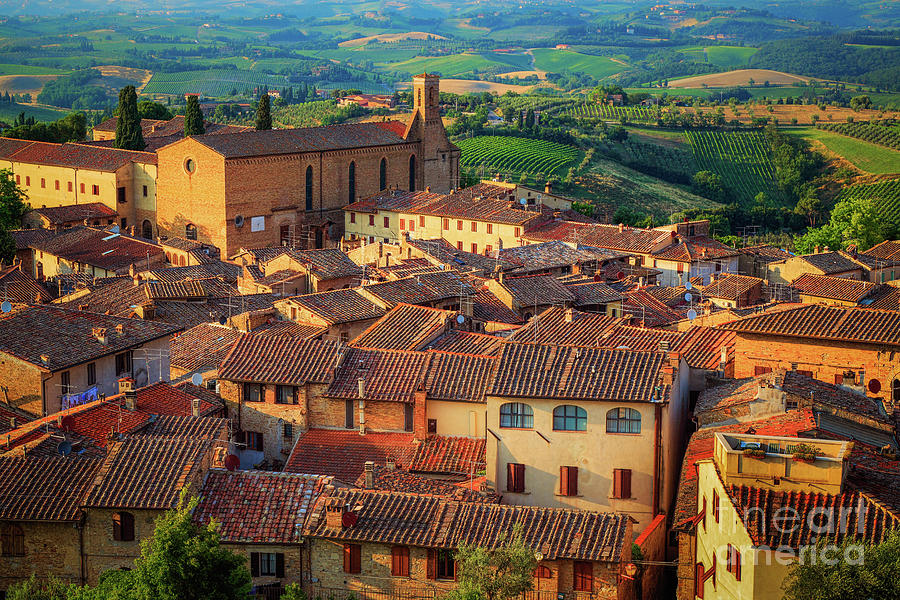 San Gimignano from Above

San Gimignano from Above

San Gimignano is a small walled medieval hill town in the province of Siena, Tuscany, north-central Italy. Known as the Town of Fine Towers, San Gimignano is famous for its medieval architecture, unique in the preservation of about a dozen of its tower houses, which, with its hilltop setting and encircling walls form "an unforgettable skyline". Within the walls, the well-preserved buildings include notable examples of both Romanesque and Gothic architecture, with outstanding examples of secular buildings as well as churches. The Palazzo Comunale, the Collegiate Church and Church of Sant' Agostino contain frescos, including cycles dating from the 14th and 15th centuries. The "Historic Centre of San Gimignano", is a UNESCO World Heritage Site. The town also is known for the white wine, Vernaccia di San Gimignano, produced from the ancient variety of Vernaccia grape which is grown on the sandstone hillsides of the area. In the 3rd century BC a small Etruscan village stood on the site of San Gimignano. Chroniclers Lupi, Coppi and Pecori relate that during Catiline conspiracy against the Roman Republic in the 1st century, two patrician brothers, Muzio and Silvio, fled Rome for Valdelsa and built two castles, Mucchio and Silvia (now San Gimignano). The name of Silvia was changed to San Gimignano in 450 AD after the Saint of Modena, Bishop Geminianus intervened to spare the castle from destruction by the followers of Attila the Hun. As a result, a church was dedicated to the Saint and in the 6th and 7th centuries a walled village grew up around it, subsequently called the "Castle of San Gimignano" or Castle of the Forest because of the extensive woodland surrounding it. From 929 the town was ruled by the bishops of Volterra.

Congratulations on your1000 views group feature!lf

Congratulation.....your wonderful work has been featured in the 1000 Views on 1 Image Group ..... Please place your featured image in the Feature Archive and any other appropriate Archives l/f/p

Congratulations on your feature in Images of Europe on Fine Art America!

Congratulations on your feature in Images of Europe on Fine Art America!

Glorious cityscape - the colors r so fresh and vibrant! L

I LOVED this town; so nice to see your beautiful remembrance!

Congratulations on the Sale

Beautiful work!! Congrats on your sale!!

Congrats on your sale Inge, fantastic capture of this amazing medieval town!

Thank you, Elise. In Nice right now, and will be in Firenze for a few days over the next weekend. More images to come :-) Visited St Paul de Vence yesterday and got a few nice shots there, of mostly windows, doors, and architecture.

Congratulations on your sale, such gorgeous view and light!

Many thanks for the kind words!

Congratulations on the sale of your great image Inge, fav, voted and promoted

Thank you very much, John, for fave/vote and your kind words :-)

Mesmerizing photo, Inge....the light and colors are so beautiful! F&V

Thank you Mona. These Old World rooftops in southern Europe (Italy) are so beautiful and unique.