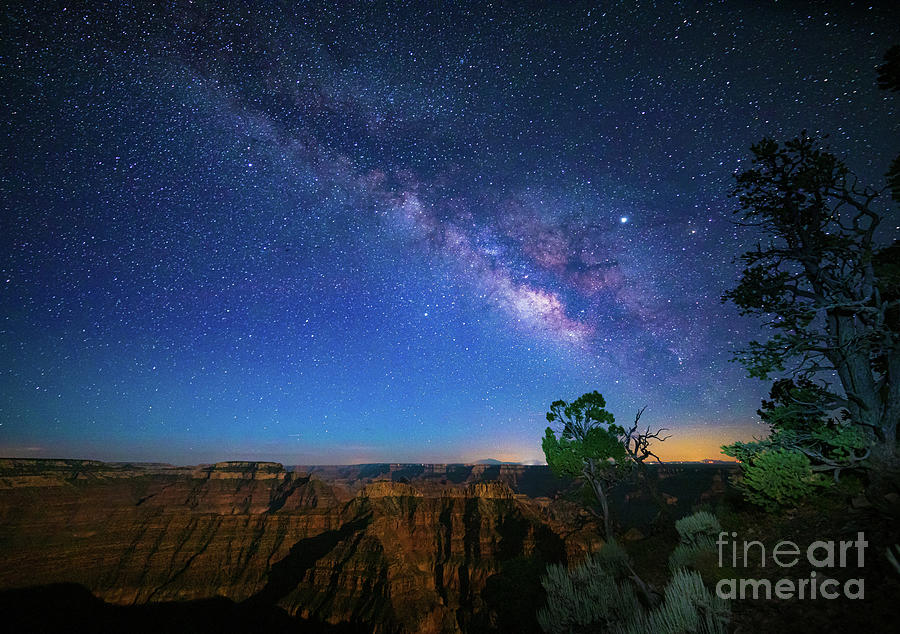 The nightsky and Milky Way over Point Sublime on the North Rim of the Grand Canyon, Arizona
.....
The Grand Canyon is a steep-sided canyon carved by the Colorado River in the state of Arizona in the United States. It is contained within and managed by Grand Canyon National Park, the Hualapai Tribal Nation, the Havasupai Tribe and the Navajo Nation. President Theodore Roosevelt was a major proponent of preservation of the Grand Canyon area, and visited it on numerous occasions to hunt and enjoy the scenery.
The Grand Canyon is 277 miles long, up to 18 miles wide and attains a depth of over a mile. Nearly two billion years of Earth's geological history have been exposed as the Colorado River and its tributaries cut their channels through layer after layer of rock while the Colorado Plateau was uplifted. While the specific geologic processes and timing that formed the Grand Canyon are the subject of debate by geologists, recent evidence suggests that the Colorado River established its course through the canyon at least 17 million years ago. Since that time, the Colorado River continued to erode and form the canyon to its present-day configuration.
For thousands of years, the area has been continuously inhabited by Native Americans who built settlements within the canyon and its many caves. The Pueblo people considered the Grand Canyon ("Ongtupqa" in the Hopi language) a holy site, and made pilgrimages to it. The first European known to have viewed the Grand Canyon was García López de Cárdenas from Spain, who arrived in 1540.

Congratulations on your recent sale, Inge!

Congratulations, Inge – your stunning scene has been selected as an Honorable Mention from the Go Take a Hike Photography Group’s Night Photography photo contest! It has been placed in the Special Recognition thread in the group discussion board for archive.

Congratulations! Your fantastic photographic art has been chosen as a Camera Art Group feature! You are invited to archive your work in the Features Archive discussion as well as any other discussion in which it would fit!

Congratulations Inge, your work is Featured in "Photographic Camera Art" I invite you to place it in the group's "2019 Featured Image Archive" Discussion!! L/Tweet!

CONGRATULATIONS! It is my great pleasure to FEATURE your outstanding artwork on the homepage of the Artist Group No Place Like Home, 7/24/2019! You are invited to post it in the Group's Features Discussion thread for posterity or any other thread that fits!