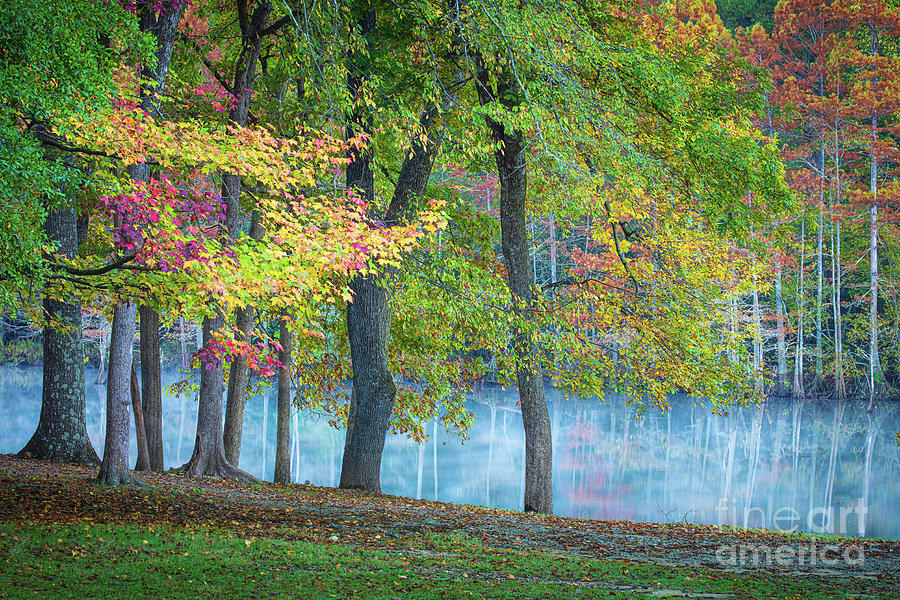 Beavers Bend State Park is a 1,300 acres Oklahoma state park located in McCurtain County. It is approximately 10.5 miles north of Broken Bow. It was established in 1937 and contains Broken Bow Lake. Built on the site of an old Choctaw settlement, Beavers Bend State Park was named after John T. Beavers, a Choctaw intermarried citizen. The "bend" in the park's name refers to an area of the park where a portion of Mountain Fork River meanders sharply, making an almost 180-degree turn. This area is commonly known as the River Bend, and is a popular area for trout fishing, canoe rentals, and swimming. Also in the River Bend area is the Broken Bow Hydroelectric Plant, which generates energy from the waters of Broken Bow Lake.
The local rock formations are some of the most distinctive in the state of Oklahoma. Just north of Broken Bow, sedimentary rock has been thrust upward due to an ancient collision of the North American and South American Plates, forming what is now the Ouachita Mountains. Evidence of what is called the Ouachita orogeny can be seen all over the park, where some layers of rock can be seen tilted up at angles of about sixty-degrees. These geologic features can be easily viewed around Broken Bow Lake and Mountain Fork River, where erosion has left much of the rock exposed.

Congratulations, your work is Featured in "Photographic Camera Art" I invite you to place it in the group's "2020-2022 Featured Image Archive" Discussion!

Your lovely piece of art from your portfolio of beautiful artistic pieces, has been chose to appear as a feature on the homepage of the Wisconsin Flowers and Scenery Group of Fine Art America. I am proud that you have chosen to be a member of our family of friends and fine artists. You will be featured more than most groups feature works, as I change up and work on my homepage each and every day. It is an honor to have you as an active member of our group. Thanks for sharing your lovely pieces of artwork with us.

Congratulations on your sale, Inge!

Art provides an opportunity for kaleidoscopic thinking. Each time we shift the lens of our perceptions, we gain new perspectives — and new opportunities for innovation. CONGRATULATIONS ON YOUR RECENT SALE OF AN WONDERFUL WORK!

So beautiful and Congrats on your sale!!

Congratulations on your sale today! L/F.

Bravo on your wonderful sale.

Nice work my friend! Congrats on the new sale!