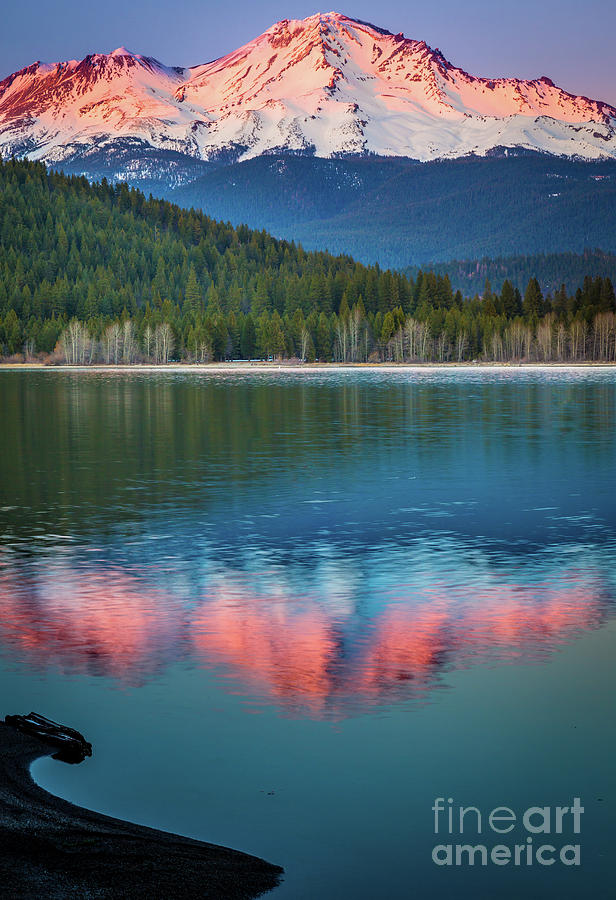 Mount Shasta is located at the southern end of the Cascade Range in Siskiyou County, California and at 14,179 feet is the second highest peak in the Cascades and the fifth highest in California. Mount Shasta has an estimated volume of 85 cubic miles which makes it the most voluminous stratovolcano in the Cascade Volcanic Arc.

The mountain and its surrounding area are managed by the U.S. Forest Service, Shasta-Trinity National Forest.

Mount Shasta is not connected to any nearby mountain and dominates the northern California landscape. It rises abruptly and stands nearly 10,000 ft above the surrounding terrain. On a clear winter day snowy Mount Shasta can be seen from the floor of the valley 140 miles south. The mountain has attracted the attention of poets, authors, and presidents.
The mountain consists of four overlapping volcanic cones which have built a complex shape, including the main summit and the prominent satellite cone of 12,330 ft Shastina, which has a visibly conical form. If Shastina were a separate mountain, it would rank as the fourth-highest peak of the Cascade Range (after Mt. Rainier, Rainier's Liberty Cap, and Mt. Shasta itself).

Mount Shasta's surface is relatively free of deep glacial erosion except, paradoxically, for its south side where Sargents Ridge runs parallel to the U-shaped Avalanche Gulch. This is the largest glacial valley on the volcano, although it does not presently have a glacier in it. There are seven named glaciers on Mount Shasta, with the four largest (Whitney, Bolam, Hotlum, and Wintun) radiating down from high on the main summit cone to below 10,000 ft primarily on the north and east sides. The Whitney Glacier is the longest and the Hotlum is the most voluminous glacier in the state of California. Three of the smaller named glaciers occupy cirques near and above 11,000 ft on the south and southeast sides, including the Watkins, Konwakiton, and Mud Creek Glaciers.

Congratulations on this sale!

CONGRATULATIONS your outstanding artwork is FEATURED on the highly viewed Art Group: MOTIVATION MEDITATION INSPIRATION! Out of of hundreds of pieces of artwork received daily to review and choose from, your work has been chosen because of it's excellence!