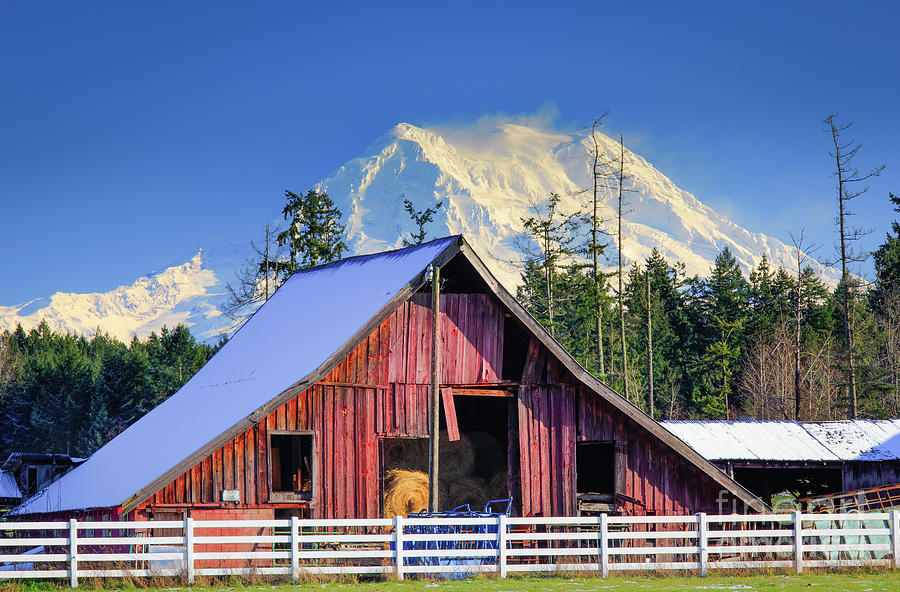 Barn outside Mount Rainier National Park with the peak of the mountain looming behind it.
.....
Mount Rainier National Park is a United States National Park located in southeast Pierce County and northeast Lewis County in Washington state. It was established on March 2, 1899 as the fifth national park in the United States. The park encompasses 236,381 acres including all of Mount Rainier, a 14,411-foot stratovolcano. The mountain rises abruptly from the surrounding land with elevations in the park ranging from 1,600 feet to over 14,000 feet. The highest point in the Cascade Range, around it are valleys, waterfalls, subalpine meadows, old-growth forest and more than 25 glaciers. The volcano is often shrouded in clouds that dump enormous amounts of rain and snow on the peak every year and hide it from the crowds that head to the park on weekends.

Mount Rainier is circled by the Wonderland Trail and is covered by several glaciers and snowfields totaling some 35 square miles. Carbon Glacier is the largest glacier by volume in the contiguous United States, while Emmons Glacier is the largest glacier by area. About 1.8 million people visit Mount Rainier National Park each year. Mount Rainier is a popular peak for mountaineering with some 10,000 attempts per year with approximately 50% making it to the summit.

Congratulations, your work is Featured in "Photographic Camera Art" I invite you to place it in the group's "2020-2021 Featured Image Archive" Discussion!! L

Congratulations, your beautiful artistic work is Featured on the home page of the "Bedroom Art Gallery" group. 8/28/21 l/f/pin

Congratulations on your Best of the Best of WFS Artists.

Congratulations on WFS Best of Best! Makes me want to be there

Congratulations on your Best of the Best homepage Feature in WFS!!...L

Dear Wisconsin Flowers and Scenery Group Member, You are to be congratulated on your achievement of getting your beautiful piece of artwork chosen to be featured in our “Best of the Best” section of our homepage. This is truly an honor to be selected for this special feature. If your works are featured, it is always an honor, but this honor is above and beyond what one sees most of the time. It is excellently done and presented and deserves a special place on our homepage. Happy sales to you till we meet again.

BRAVO! Your artwork has earned a FEATURE on the homepage of the FAA Artist Group No Place Like Home, 8/9/2021! You may also post it in the Group's Features discussion thread and any other thread that fits! l/f

Congratulations your photograph has been featured in the FAA Group ‘The Outdoor Photographer' You are invited to post your featured images in the Group's 'Thanks for the Feature / photo archive.

Love the white fence and that deep blue sky to pick up the blue in the barn roof Inge! Congrats on your Feature in Barns Big and Small. We also added our like. Celebrate life, Debra and Dave

Great! Congrats on your sale! fav

Congratulations on your sale!!!!

Nice work ! Congrats on your sale.

Congratulations on the sale! Definitely L/F