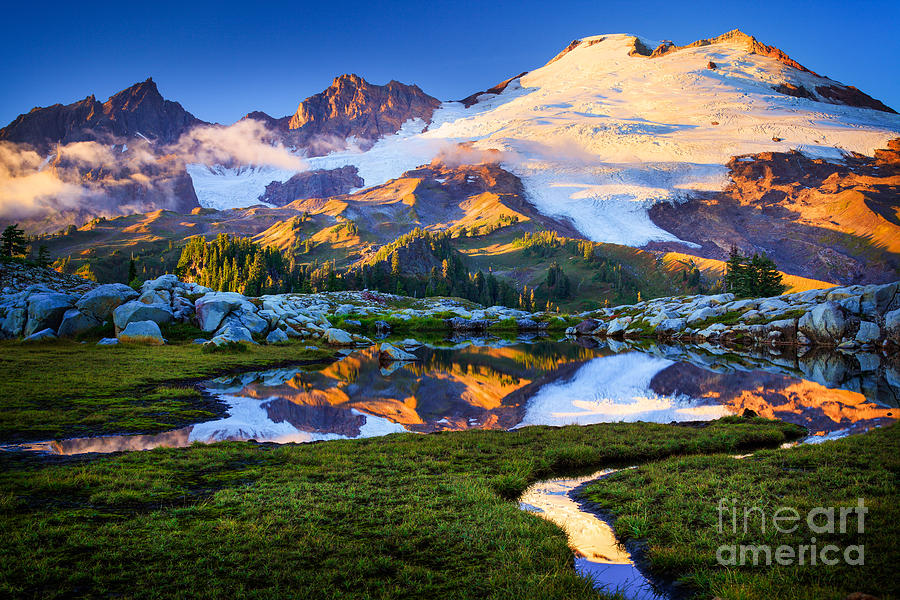 Mount Baker reflecting in tarn near Park Butte in the Mount Baker Wilderness
.....
Mount Baker, also known as Koma Kulshan or simply Kulshan, is an active glaciated andesitic stratovolcano in the Cascade Volcanic Arc and the North Cascades of Washington State in the United States. Mount Baker has the second-most thermally active crater in the Cascade Range after Mount Saint Helens. About 31 miles due east of the city of Bellingham, Whatcom County, Mount Baker is the youngest volcano in the Mount Baker volcanic field. While volcanism has persisted here for some 1.5 million years, the current glaciated cone is likely no more than 140,000 years old, and possibly no older than 80-90,000 years. Older volcanic edifices have mostly eroded away due to glaciation.
After Mount Rainier, Mount Baker is the most heavily glaciated of the Cascade Range volcanoes; the volume of snow and ice on Mount Baker, 0.43 cu mi is greater than that of all the other Cascades volcanoes (except Rainier) combined. It is also one of the snowiest places in the world; in 1999, Mount Baker Ski Area, located 8.7 mi to the northeast, set the world record for recorded snowfall in a single season - 1,140 in. At 10,781 ft, it is the third-highest mountain in Washington State and the fifth-highest in the Cascade Range, if Little Tahoma Peak, a subpeak of Mount Rainier, and Shastina, a subpeak of Mount Shasta, are not counted. Located in the Mount Baker Wilderness, it is visible from much of Greater Victoria, Greater Vancouver, and, to the south, from Seattle (and on clear days Tacoma) in Washington.

Nice! Congratulations on your recent sale!

Beautiful as always, congratulations on your sale!

As always, beautiful image! Congratulations on your sale!

Hi Inge...I like your image. What a wonderful location and you have made a fine photograph there. Well done...Cheers Bob f/v

Congratulations on your feature in The Artistic Photographer on Fine Art America!

You so wonderfully express the beauty of God's natural wonders, Inge! V

Mike, you are a funny man :-D Thanks!

I can see Mount Baker from my house and love all it's views. I must say that is the most stunning image I have seen of it yet!

Thanks, Sherry. I have seen Mt Baker many times myself also, but this was the most fantastic show so far. Cloudy all day until the last 30 minutes before sunset. I was ecstatic :)