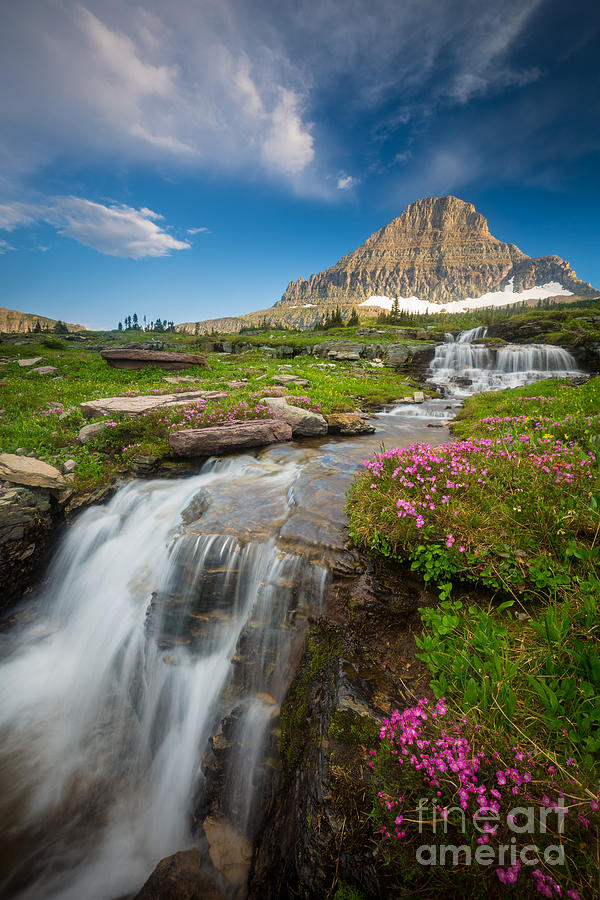 Glacier National Park is a national park located in the U.S. state of Montana, on the Canada�United States border with the Canadian provinces of Alberta and British Columbia. The park encompasses over 1 million acres and includes parts of two mountain ranges (sub-ranges of the Rocky Mountains), over 130 named lakes, more than 1,000 different species of plants, and hundreds of species of animals. This vast pristine ecosystem is the centerpiece of what has been referred to as the "Crown of the Continent Ecosystem", a region of protected land encompassing 16,000 square miles.

The region that became Glacier National Park was first inhabited by Native Americans. Upon the arrival of European explorers, it was dominated by the Blackfeet in the east and the Flathead in the western regions. Soon after the establishment of the park on May 11, 1910, a number of hotels and chalets were constructed by the Great Northern Railway. These historic hotels and chalets are listed as National Historic Landmarks and a total of 350 locations are on the National Register of Historic Places. By 1932 work was completed on the Going-to-the-Sun Road, later designated a National Historic Civil Engineering Landmark, which provided greater accessibility for automobiles into the heart of the park.

The mountains of Glacier National Park began forming 170 million years ago when ancient rocks were forced eastward up and over much younger rock strata. Known as the Lewis Overthrust, these sedimentary rocks are considered to have some of the finest fossilized examples of extremely early life found anywhere on Earth. The current shapes of the Lewis and Livingston mountain ranges and positioning and size of the lakes show the telltale evidence of massive glacial action, which carved U-shaped valleys and left behind moraines which impounded water, creating lakes. Of the estimated 150 glaciers which existed in the park in the mid-19th century, only 25 active glaciers remained by 2010. Scientists studyin

congrats on your sale

Inge, Congratulations on your feature in Pure Nature Photography - celebrating the best of our natural world!

This is a beautiful landscape, Inge! :))

Congratulations your beautiful work is being featured in the World We See Group:-)

Inge, Congratulations on your feature in our group, I Love Nature Photography - celebrating the best of our natural world!

It is a true honor and privilege to FEATURE this creative and wondrous piece of art work on the WFS site. This awesome piece of beauty is what we are looking for to promote. Your works are some of the Best of the Best in my Book! Thanks much for sharing this beauty with us. Liked Forever, Elvis

Awesome Imagery. You do great work.