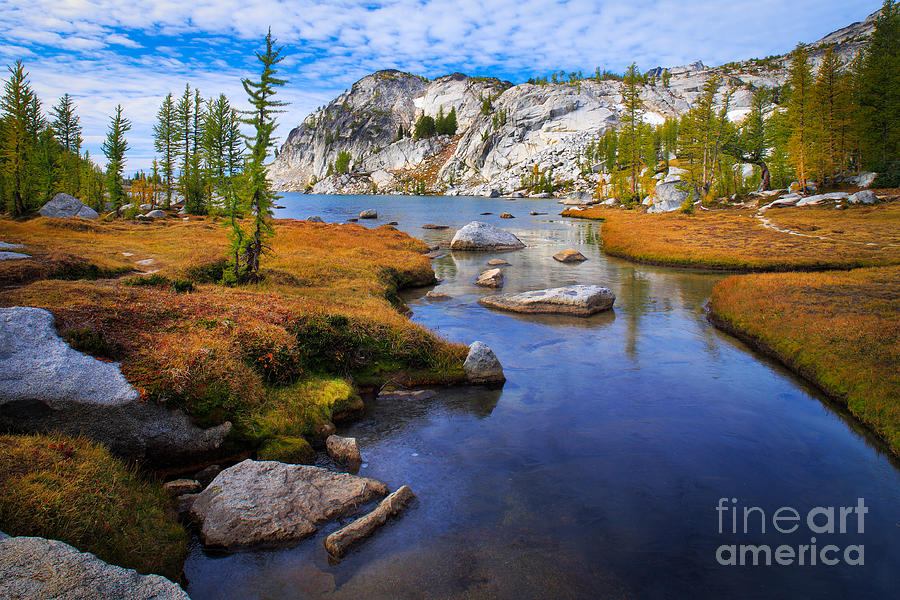 Creek entering Perfection Lake in the Enchantment Lakes area of Alpine Lakes Wilderness, Washington
.....
The Enchantments is an area comprising an upper and a lower basin, the lakes and tarns contained within them, and the peaks of the Stuart Range bounding the basins. The area is located entirely within the Alpine Lakes Wilderness about 15 miles (24 km) southwest of Leavenworth, Washington in the United States. The Enchantments is regarded as one of the most spectacular locations in the Cascade Range. The first European American to discover the area and name it was A.H. Sylvester, topographer for the US Geological Survey and first supervisor of the Wenatchee National Forest. Sylvester visited the middle Enchantment basin and probably did not venture into the upper basin. Snow Creek Glacier covered more of the upper basin at the time than it does today, which may have discouraged him from exploring the higher areas. He is credited with naming some of the features in the region.
By the 1940s climbers discovered the area and began naming the crags. Bill and Peg Stark of Leavenworth, became frequent visitors who drew upon various mythologies to name features of the landscape. When they made their first visit in the fall of 1959, they were captivated by the golden splendor of the larch trees in the fall, the numerous lakes and tarns, and jagged peaks towering above. They used fairy names such as Gnome Tarn, Troll Sink, Naiad Lake (officially Temple Lake), Sprite and King Arthur legends in the Lower Enchantment Basin because "the lower basin was not as austere as the upper basin," according to Peg. They used Norse names and mythology for features of the upper basin, for example Brynhild Lake (officially Inspiration Lake), Lake Freya (officially Tranquil Lake), and Valhalla Cirque because, Peg said, it felt "as if the Ice Age had just gone off."
The official naming rulings of the US Board on Geographic Names in the 1960s resulted in a mixture of two name sets being adopted as official, particularly for the lakes, but also exemplified by the feature popularly known as Aasgard Pass being officially designated Colchuck Pass. Different sources still use the unofficial names in some contexts. The current policy of not adopting new names for geographic features in wilderness areas probably precludes the rest of the names identified by the Starks from achieving official status.

congrats Inge on your sale

Congratulation on sale announcement and great.

Congrats on your sale!!!

Congratulation on your sale, Inge!