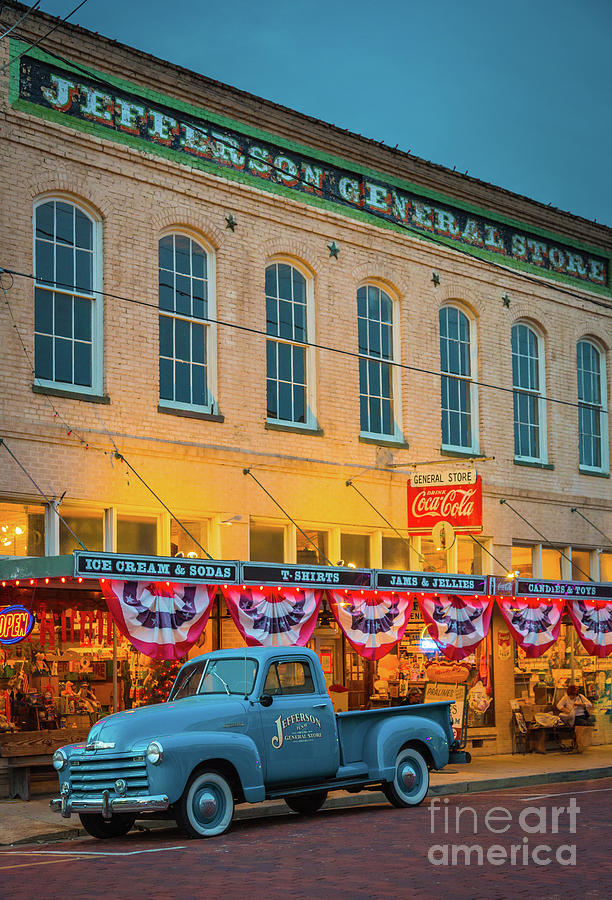 Jefferson is a historic city in Marion County in northeastern Texas, United States. The population was 2,024 at the 2000 census. It is the county seat of Marion County, Texas, and is situated in East Texas. The city is a tourism center, with popular attractions including: Jay Gould's Railroad car, the Sterne Fountain, Jefferson Carnegie Library, Excelsior House, the House of the Four Seasons, and the bayous formed by Big Cypress Bayou located in and around the city.
Almost every commercial building and house on the main arterial road in Jefferson has a historic marker.
The Sterne Fountain was given to the city in 1913 to honor the contribution of Jacob and Ernestine Sterne, a Jewish couple who settled in Jefferson before the Civil War and became prominent citizens who managed the post office and were involved in numerous civic and cultural projects. The fountain includes a statue of Hebe, the Greek goddess of Youth, by Giuseppe Moretti.
Early records indicate that Jefferson was founded around 1841 on land ceded from the Caddo Indians. At that time, a log jam more than 100 miles long existed on the Red River north of present Natchitoches, Louisiana. The Indians said that this log jam, known as the Great Red River Raft, had always existed.
The Red River Raft (or Great Raft) acted as a dam on the river and raised the level of Caddo Lake and the Red River several feet. This rise of Caddo Lake and the corresponding rise in the Big Cypress Bayou at Jefferson permitted commercial riverboat travel to Jefferson from ports such as St. Louis and New Orleans via the Mississippi and Red Rivers.
Jefferson was one of the most important ports in Texas between 1845 and 1872. The town reached its peak population just a few years after the Civil War and is reported to have exceeded 30,000. During this time, Jefferson was the sixth largest town in Texas.
There were attempts over the years to remove the raft and permit the normal flow of the Red River, but these attempts were unsuccessful until the discovery of nitroglycerin. In 1873, using nitroglycerin, the Army Corps of Engineers was finally able to clear the raft from the Red River. This lowered the level of Caddo Lake and Big Cypress to the extent that riverboat traffic to Jefferson was no longer commercially feasible. At the peak of river traffic Jefferson had a population of over 7,000. A few years later, it had dropped to a little over 3,000.
One of the legends surrounding Jefferson involved Jay Gould, the railroad magnate. The legend goes that Gould wanted to bring his railroad through Jefferson but the town leaders refused because they had the river traffic. Gould responded by saying that grass would grow in the streets without the railroad. Gould is even given credit for supporting the removal of the Red River Raft and the subsequent decline of Jefferson as a river port. Much of this tale is fiction, but it makes a good tale. Townspeople even obtained Gould's railcar and it is presently displayed as a tourist attraction in downtown Jefferson.
Jefferson, since 2000, has been the location for the Pulpwood Queens Book Club Girlfriend Weekend's annual conference, attracting authors from all around the country.

Congratulation.....your wonderful work has been featured in the 1000 Views on 1 Image Group l/f/p

Congratulations! Your artwork recently submitted to our group WFS, has been chosen to be featured on our homepage with other members of our family of friends and fine artists. Thanks for sharing the beauty. It is a pleasure to promote beautiful works of art such as this, within our family of fine artists.

This unique and creative artwork has been featured on the Art District Group home page. Congrats for this tremendous accomplishment! Please archive your work in the groups "Feature Archives & Thank You Thread"...Pamela

Your photo and digital work on the Jefferson General Store is amazing! I love your galleries and the way you handle the golden light. f/tweet

Congrats on your recent sale. Inspiring work. Check my Artwork when you have time. Thanks.

Big WOW. This is so cool, a slice of Americana. f/v

Thanks Chris. Yes, I was quite pleased as I walked through downtown Jefferson that evening and saw the beauty of this old Texas town.

Many thanks for the kind words, Odon.

Beautiful scene, great light and colors. Congrats on your sale!

Congratulations Inge on your sale of a great photo

Thanks John, I am very grateful for the sale and the nice customer in Marshall, TX.

Just can't go wrong with that triplet ;-) Thanks!