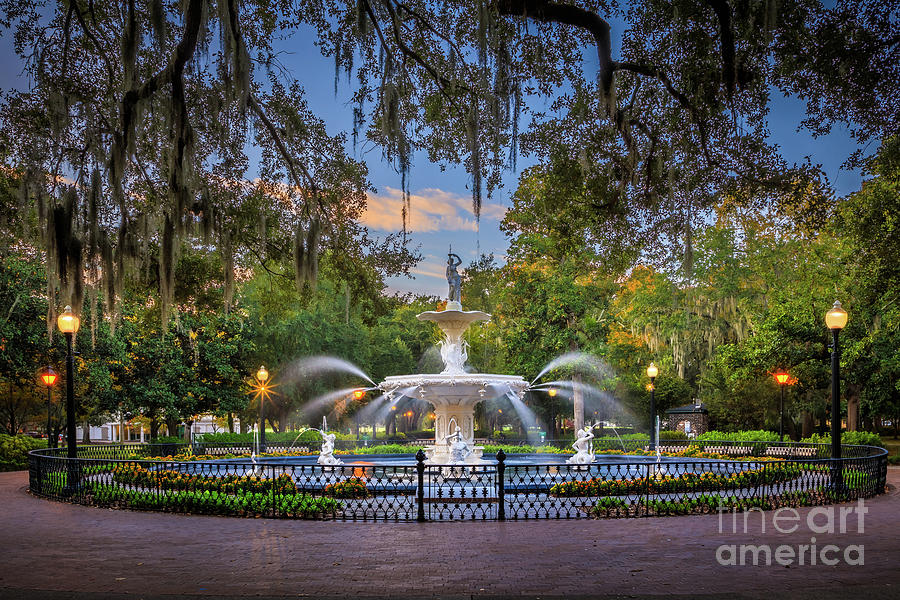 Forsyth Park is a large city park that occupies 30 acres in the historic district of Savannah, Georgia. The park is bordered by Gaston Street on the North, Drayton Street on the East, Park Avenue on the South and Whitaker Street on the West. It contains walking paths, a children's play area, a Fragrant Garden for the blind, a large fountain, tennis courts, basketball courts, areas for soccer and Frisbee, and home field for Savannah Shamrocks Rugby Club. From time to time, there are concerts held at Forsyth to the benefit of the public.

The fountain at the north end of the park was added in 1858 and is reminiscent of fountains in the Place de la Concorde in Paris and in Cuzco, Peru. At this time, Parisian urban planning was centered on the development of residential neighborhoods radiating out from a central green space. The Parisian model of developing large city parks was emulated by large cities in the United States, with even smaller cities, such as Savannah, asserting their own cosmopolitan image.

Congratulations, your work is Featured in "Photographic Camera Art" I invite you to place it in the group's "2020-2021 Featured Image Archive" Discussion!! L

Congratulations, your beautiful artistic work is Featured on the home page of the "Bedroom Art Gallery" group. 7/7/21 l/f

Congratulations! Your beautiful HDR image has been featured on the homepage of the original "HDR photography" group here at Fine Art America.

Your artwork has been featured on the homepage of FAA Gallery Home For All Artists Who Create. Please post your amazing artwork in our` Archive your JULY Features` discussion.

It is with great pleasure that I announce to you a big congratulations for this chosen piece of your artwork to be on special display on the homepage of our community of friends and fine artists, in our Wisconsin Flowers and Scenery group. I appreciate your activity in our group and want to thank you so much for being an active participant in helping promote other fine artists within the group. Usually in turn, such promotions bring promotions of your artwork into perspective and are featured on our homepage. One good turn deserves another. Your quality, definition, character, and variation in your works bring about a visual pleasure to view and share with others. Thanks for your participation in our family of friends and fine artists in our WFS group.

It is my pleasure to inform you that your AWESOME photo is FEATURED on the HOMEPAGE OF "SHOWCASING THE SOUTH GROUP"! L Please add the photo to the 2021 “FEATURED IMAGE ARCHIVE THREAD.” Thank you for participating in the group.

Congrats on your Sale. Wish you many more to come!

I really like this framing...I'm drawn to unique perspectives...yours are wonderful.