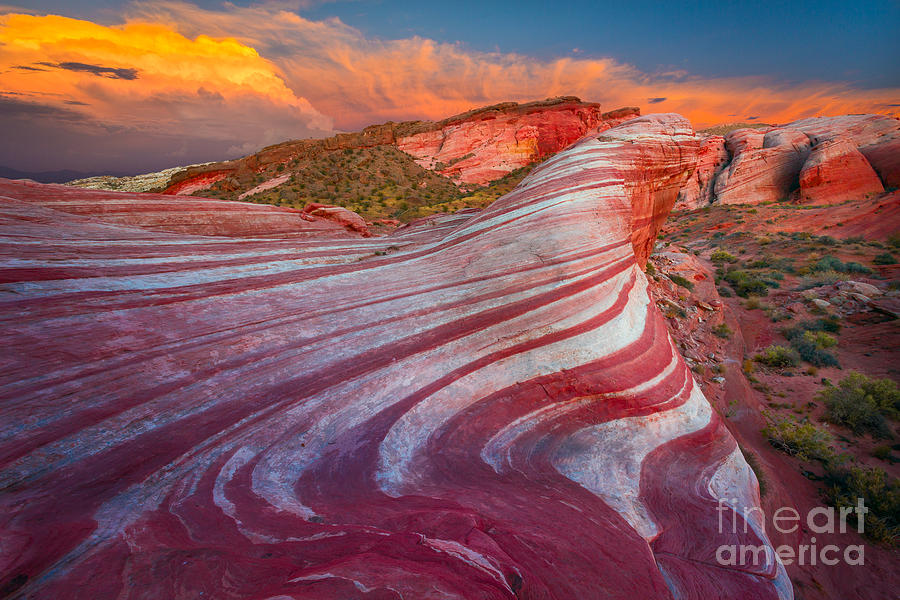 Valley of Fire State Park, Nevada
.....
Valley of Fire State Park is the oldest state park in Nevada, USA and was designated as a National Natural Landmark in 1968. It covers an area of almost 42,000 acres and was dedicated in 1935. It derives its name from red sandstone formations, formed from great shifting sand dunes during the age of dinosaurs. These features, which are the centerpiece of the park's attractions, often appear to be on fire when reflecting the sun's rays.
Valley of Fire is located 50 miles northeast of Las Vegas, at an elevation between 2,000�2,600 feet. It abuts the Lake Mead National Recreation Area at the Virgin River confluence. It lies in a 4 by 6 mi basin.
Complex uplifting and faulting of the region, followed by extensive erosion, have created the present landscape. The rough floor and jagged walls of the park contain brilliant formations of eroded sandstone and sand dunes more than 150 million years old. Other important rock formations include limestones, shales, and conglomerates.

What a picture. Fine work and well deserved rewards.

What a gorgeous place this must be and a wonderfully composed and processed capture from there. Congratulations on your 1st place win in the recent State Parks contest.

A total Wow factor on this natural beauty, Inge! It is with great pride and pleasure that I showcase this beautiful piece of your art work on the HOMEPAGE of the Wisconsin Flowers and Scenery group site. I believe your works to be well composed, masterfully displayed, and a true joy to view. Thanks for sharing your talents with our members of WFS group and all members on FAA. Your excellence sets a standard to be proud of. LIKED and FAVED Forever, Elvis

after all we've seen from this spot, who woul;d say we can still be impressed! Wonderful PoV and I love the flow of lines. all superb Inge! - Aimelle

This is fantastic! You put yourself in the perfect spot to capture this beauty. The way the white and red ribbons flow, it reminds me of the American flag waving in the wind protecting our great nation! f/v

WOW - is this real! Looks like some other worldly landscape. Amazing shot! v/f

What a beautiful presentation and congrats for being selected on the feature page!! v/f/t

Nice perspective! Love the curves of the striations front and center, as well as the sun-lit clouds in the background! F/V