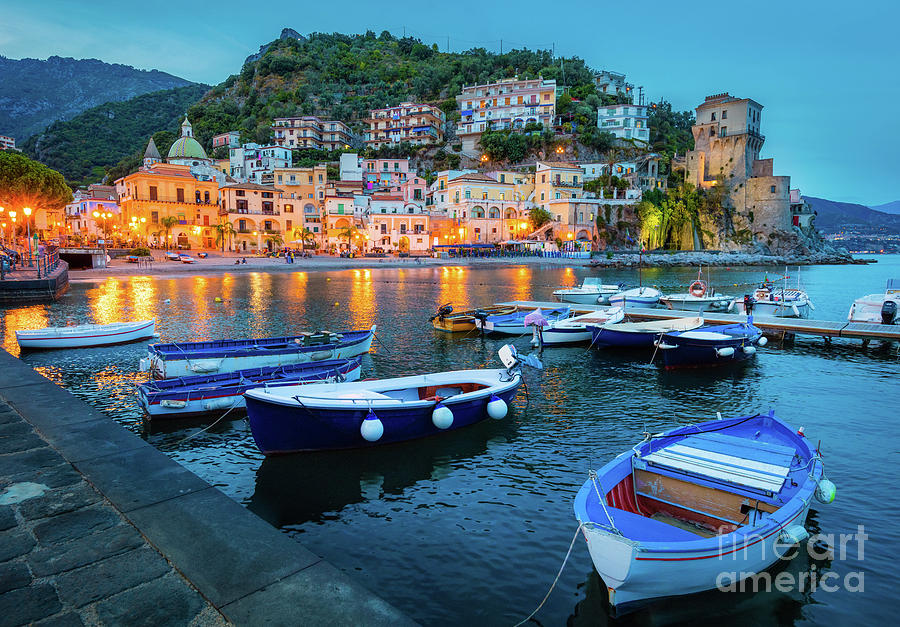 Cetara is a town and comune in the province of Salerno in the Campania region of south-western Italy. It is located in the territory of the Amalfi Coast. The village was originally a settlement for a group of armed Muslims in 880. Characterized to be a village of fishermen (especially of tuna), its name take origins probably from the Latin word Cetaria (in Greek Ket�ia), meaning almadraba (in Italian tonnara); or cetari, meaning fishmongers of big fishes. Cetara is located by the Tyrrhenian Sea, on the Amalfi Drive road between the "Marina" of Albori and Erchie, bordering with the municipalities of Vietri sul Mare and Maiori. Its municipalities is extended from the coast to the Mount Falerio and counts only one civil parish (frazione): the little village of Fuenti, situated on the hills close to the Amalfi Drive.

"The great artist is the simplifier. Vincent Van Gogh" CONGRATULATIONS ON YOUR RECENT SALE OF AN WONDERFUL WORK!

Worthy of Praise! Congratulations on your HUGE sale, Inge!.....Bravo!

Congratulations!! This stunning image has been selected to be featured for the week in the “Art for Ever with You” Group Home Page. You are welcome to add a preview of this featured image to the group’s discussion post titled “2019 January: Stunning Group Featured Images and Thank-you’s” for a permanent display within the group, to share this achievement with others. Also feel free to post your feature on our group Facebook page: https://www.facebook.com/groups/296998814248643/ . If the activity is allowed, your image will also be posted to Twitter. Thank you for your participation in the group! ~Jan (January 31, 2019)

Congratulations! Your fantastic photographic art has been chosen as a Camera Art feature! You are invited to archive your work in the Features Archive discussion as well as any other discussion in which it would fit!

Congratulations! This beautiful photo is now featured on the GYA home page. You may add it to the Featured Images Archive discussion thread.

Congratulations Inge, your work is Featured in "Photographic Camera Art" I invite you to place it in the group's "2018 Featured Image Archive" Discussion!! L/Tweet/Favorite

Inge, Congratulations! Your exceptional photographic artwork has been featured in our group, Artistic Photography! You are invited to archive it in the Featured Work Part II discussion thread for more visibility.

This is cool. And Congrats on your sale! :)

Congratulations! Your beautiful artwork has been featured on the homepage of "Travel Art" group at Fine Art America :) Please archive it in the specific travel category under discussions: https://fineartamerica.com/groups/1-travel-art.html?showmessage=true&messageid=3652847 and don't forget to promote it in our Pinterest group board and/or our Facebook group;)

Congratulations! Your excellent photography has been featured on the home page of The 200 Club, a very highly ranked Pixels/Fine Art America group. You are invited to post your featured image to all appropriate 200 Club discussion threads as a permanent archive and promotional opportunity.

Congratulations! Your inspirational work has been featured in the “Imagination-Artistry-Creativity” group. LF

This delightful picture is featured on the Master page of the “PHENOMENAL CLUB” group, and may it be known, that the author is a full member of that exceptional group. Hearty congratulations to the great artist.

This wonderful picture is featured on the homepage of the "Pictures for Present" group.

Inge, congrats on your Elvis Pick of the Week! V

Congrats on your Elvis Pick of the Week! Outstanding capture of this wonderful village! L&F

Wonderful capture of this spectacular scene, Inge! Congratulations on your Wisconsin Flowers And Scenery ELVIS PICK OF THE WEEK feature! L/F