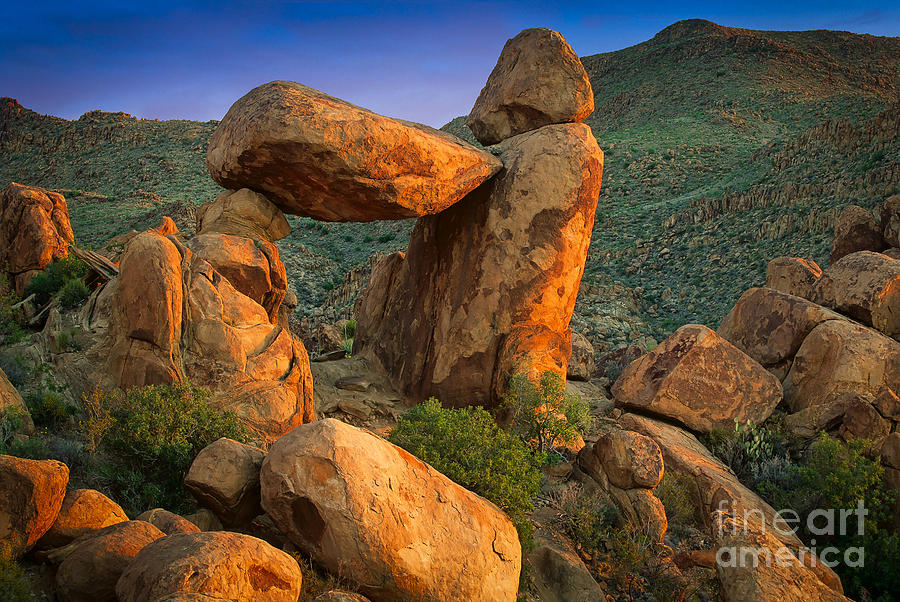 Window Rock in the Grapevine Hills area of Big Bend National Park, Texas. Big Bend National Park is a national park located in the U.S. state of Texas. Big Bend has national significance as the largest protected area of Chihuahuan Desert topography and ecology in the United States, which includes more than 1,200 species of plants, more than 450 species of birds, 56 species of reptiles, and 75 species of mammals.
The park covers 801,163 acres (1,252 sq mi. It is larger than the state of Rhode Island. Few other parks exceed this park's value for the protection and study of geologic and paleontologic resources. A variety of Cretaceous and Tertiary fossil organisms exist in abundance. Archaeologists have discovered artifacts estimated to be 9,000 years old, and historic buildings and landscapes offer graphic illustration of life along the international border in the 19th century.
For more than 1,000 miles, the Rio Grande/R�o Bravo forms the international boundary between Mexico and the United States, and Big Bend National Park administers approximately 244 miles along that boundary. The park was named after the area, which is bounded by a large bend in the Texas-Mexico border.
Because the Rio Grande serves as an international boundary, the park faces unusual constraints while administering and enforcing park rules, regulations, and policies. In accordance with the Treaty of Guadalupe Hidalgo, the park's territory extends only to the center of the deepest river channel as the river flowed in 1848. The rest of the land south of that channel, and the river, lies within Mexican territory.

Congratulations - Your beautiful artwork has been featured in the "Travel Art" group! For further promotion, you can post it to the specific Travel Destinations galleries, our Facebook group and our Pinterest board - all the links are provided on our group's homepage: https://fineartamerica.com/groups/1-travel-art.html * * Want to be on our group's blog: travelartpix.com? Check the group's homepage for details!

Congratulations, on your Feature, in "No Place Like Home", "Spirit of the West - Photographs Only", & "Bedroom Art Gallery", groups!

Congratulations Inge, your work is Featured in "Photographic Camera Art" I invite you to place it in the group's "2019 Featured Image Archive" Discussion!! L/Tweet!

I so enjoyed this picture; the colors are dramatic, the scene is so stunning. Great Job.

Hi Inge...I like your image. The Window Rock is such a great subject and you have photographed it at the right time of day. I like your point of view here...Nice work as always...Cheers Bob f/v

Inge, I guess you could call this spot the druid stones of Texas! :-) Stunning light and details! v/f

Allen, thanks so very much!