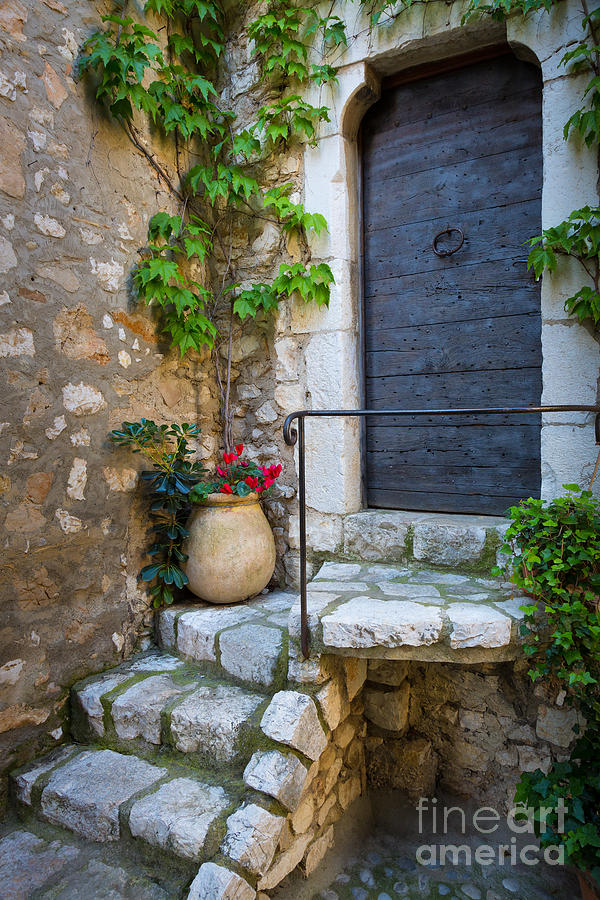 Stairs and door in Saint Paul de Vence in France
-----
Saint-Paul or Saint-Paul-de-Vence is a commune in the Alpes-Maritimes department in southeastern France. One of the oldest medieval towns on the French Riviera, it is well known for its modern and contemporary art museums and galleries such as Fondation Maeght which is located nearby. It was probably between the 10th and 12th century that a settlement formed around the ancient church of Saint Michel du Puy to the south, and near the castle on the highest part of the hill. In the Middle Ages, the region was administered by the Counts of Provence. In the 13th century, Count Charles II granted more privileges to St. Paul, including the right to hold a weekly market. At the beginning of 14th century, St. Paul acquired more autonomy and became a prosperous city of merchants and nobility. In 1388, the County of Nice broke off from Provence to reattach itself with the states belonging to the Count of Savoy. These new circumstances gave St. Paul a strategic position: the city becomes a border stronghold for five centuries. St. Paul went through its first fortification campaign in the second half of 14th century: the north gate of the city, called "Porte de Vence," dates back to the medieval wall. At the time of the wars of Italy, Provence was invaded twice by the troops of Charles V. Considering the low side of the border of Provence and the obsolescence of the medieval fortifications in Saint-Paul, Fran�ois 1st decided in 1538 to build the new city walls, able to withstand the power of the artillery. This fortified wall, built between 1543 and 1547, is preserved in its entirety. On its northern and southern fronts four solid bastions protect both the city gates. In the 17th century, Saint-Paul experienced a religious period through the influence of Antoine Godeau, Bishop of Vence. The church was elevated to college, and was expanded and embellished. St. Paul also saw an urban revival thanks to the families of nobility, who built lavish mansions, especially in the Rue Grande. St. Paul retained its role as military stronghold.

Congratulations on your sale Inge!

Congratulations, Inge, on the second sale a day!

Nice! Congrats on the sale!

Inge, this is a wonderful image. LF

Very beautiful Ancient Stairs artwork, and congrats to your third place in The Gallery Wall contest.

Congratulations in your win in The Gallery Wall contest!! Beautiful!!

Congratulations on your win in "Doors Open, Doors Closed" contest!

Congratulations Inge on your win in the contest, "Doors". This brings out a nice feeling of curiosity and holds the viewer to ponder. L

Congratulations on placing in the Gallery Wall contest. This was my favorite. :) l/f

Beautiful capture and congratulations on your win in TGW. LF

Congrats on the Doors Contest! I love this image! l/f