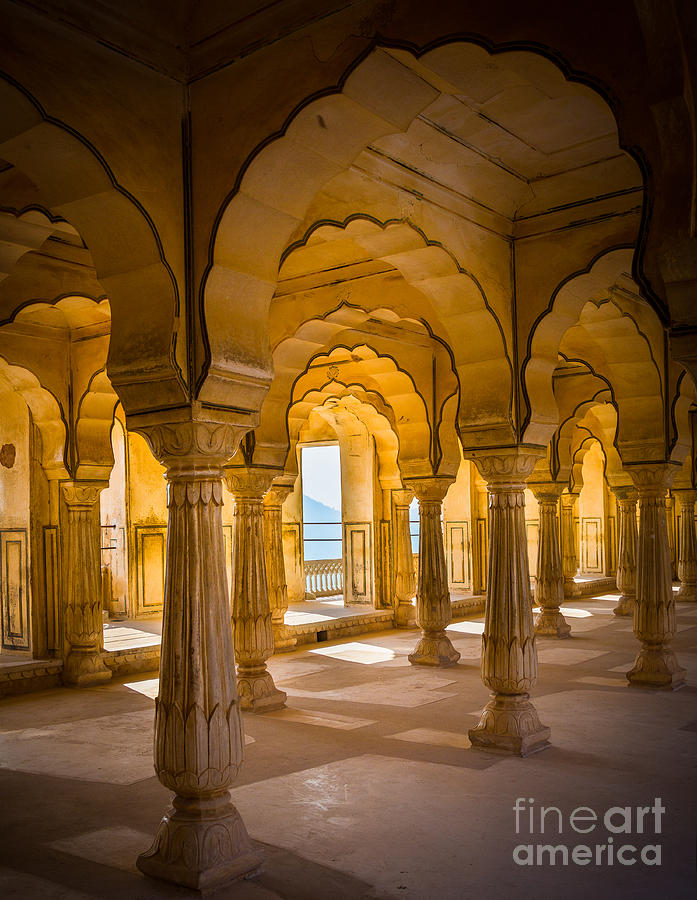 Amer Fort is located in Amer 6.8 mi from Jaipur, Rajasthan state, India. It is one of the principal tourist attractions in the Jaipur area, located high on a hill. Amer Fort was built by Raja Man Singh I. Amer Fort is known for its artistic style of Hindu elements. With its large ramparts, series of gates and cobbled paths, the fort overlooks the Maota Lake, at its forefront. The aesthetic ambiance of this formidable fort is seen within its walls on a four level layout plan (each with a courtyard) in a well turned out opulent palace complex built with red sandstone and marble consisting of the Diwan-e-Aam or the "Hall of Public Audience", the Diwan-e-Khas or the "Hall of Private Audience", the Sheesh Mahal (mirror palace) or Jai Mandir, and the Sukh Niwas where a cool climate is artificially created by winds that blow over the water cascade within the palace. Hence, the Amer Fort is also popularly known as the Amer Palace. The palace was lived in by the Rajput Maharajas and their families. At the entrance to the palace near the fort’s Ganesh Gate, there is also a temple dedicated to Sila Devi, a goddess of the Chaitanya cult which was given to Raja Man Singh when he had defeated the Raja of Jessore, Bengal in 1604. (Jessore is now in Bangladesh). This fort, along with Jaigarh Fort, located immediately above on the Cheel ka Teela (Hill of Eagles) of the same Aravalli range of hills, is considered as one complex, as the two are well connected by a subterranean passage. This passage was meant as an escape route in times of war for the royal family members and others in the Amer Fort to shift to the more redoubtable Jaigarh Fort.

Nice & Congrats on your sale :)

Beautiful capture and well deserving of a win. Congratulations! I voted for you!! f/l

Congrats on your tie for 1st place

Congratulations on your win. Beautiful photo!

Oh, my. I just love this Inge!

it's great. so beautiful.