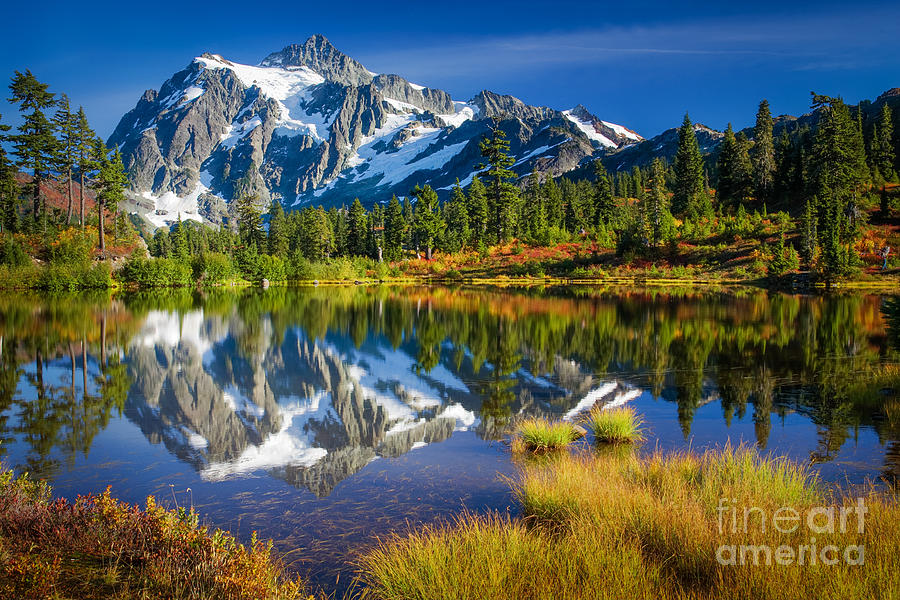 Mount Shuksan in Washington state's North Cascades National Park reflecting in Picture Lake. Mount Shuksan is a glaciated massif in the North Cascades National Park. Shuksan rises in Whatcom County, Washington immediately to the east of Mount Baker, and 11.6 miles south of the Canadian border. The mountain's name Shuksan is derived from the Lummi word, said to mean "high peak". The highest point on the mountain is a three sided peak known as Summit Pyramid. There are two named subsidiary peaks: Nooksack Tower and The Hourglass. The mountain is composed of Shuksan greenschist, oceanic basalt that was metamorphosed when the Easton terrane collided with the west coast of North America, approximately 120 million years ago. The mountain is an eroded remnant of a thrust plate formed by the Easton collision.

Nice. A place I need to add to my go-to list. Following.

Congratulations, Inge – your amazing reflection scene has been featured by the Go Take a Hike Photography Group! Feel free to add it to the Featured Images thread in the group discussion board for archive.

Congratulations on today's successful sale of this art piece!

Nice shot Inge, but this photo is duplicated on the site, so you may wish to remove one of them. Frank

Congratulations! This image was chosen as a special feature in the "Landscape and Landmark Photography" group on 9/23/14!

WOW this is absolutely incredible!! Stunning reflection, such an amazing scene!! :)

What a stunning image! Beautiful colors and composition!

Outstanding, vivid and crisp, jaw dropping. The grass in the right front add some soft texture that I like. L/F

Excellent artwork.Congrats on your sale.

Stunning! congrats on your sale!

Gorgeous, Inge! Congratulations on your sale!!

So beautiful! Love the vivid colors, reflections, and composition! Congratulations on your feature! l/v

Absolutely a gorgeous scenic beauty on this Nat Geo treasure Inge! Love it! Love the beauty of this piece and the quality and care that went into its composition! It is my pleasure to PROMOTE this piece of beauty on our FEATURED ARTWORK section of the Wisconsin Flowers and Scenery group. Thanks for sharing! Liked Forever, Elvis