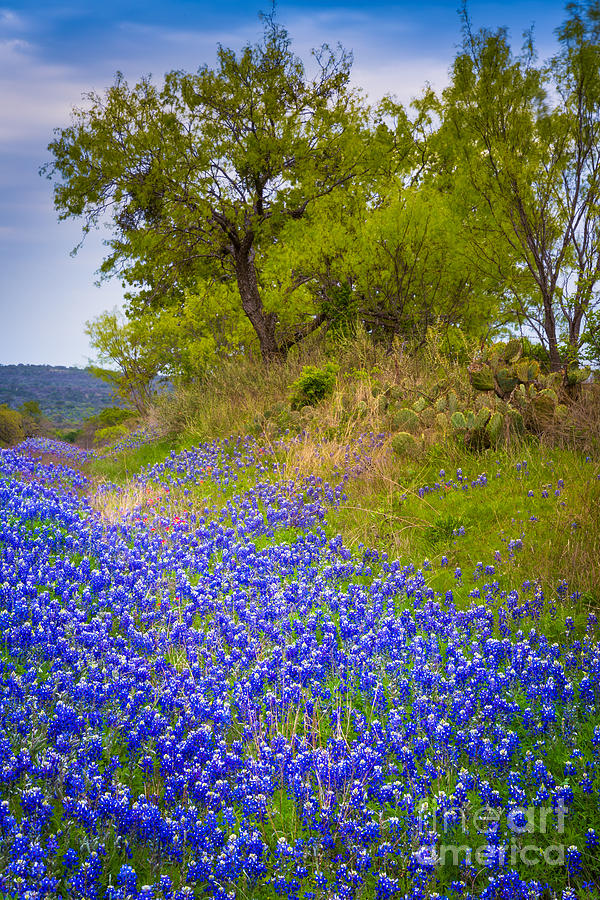 Bluebonnets Llano in Central Texas. Lupinus texensis, the Texas bluebonnet, is a species of lupine endemic to Texas. With other related species of lupines also called bluebonnets, it is the state flower of Texas. It is a biennial plant which begins its life as a small, gravel-like seed. The seed has a hard seed coat that must be penetrated by wind, rain, and weather over the course of a few months (but sometimes several years). In the fall, the bluebonnets emerge as small seedings with two cotyledons, and later a rosette of leaves that are palmately compound with 5-7 leaflets 3-10 cm long, green with a faint white edge and hair. Growth continues over the mild winter months and then in the spring will take off and rapidly grow larger, before sending up a 20-50 cm tall plume of blue flowers (with bits of white and occasionally a tinge of pinkish-red). The scent of these blossoms has been diversely described; many people say they give off no scent at all, while a few have described the scent as 'sickly sweet'. It has been found in the wild with isolated mutations in other colors, most notably all-white flowers, pink, and maroon. These mutations have since been selectively bred to produce different color strains that are available commercially.

Beautiful, congrats on the sale!!

What a vibrant beauty Inge....great capture!

How pretty this is Inge! They are such a beautiful shade of blue! LF